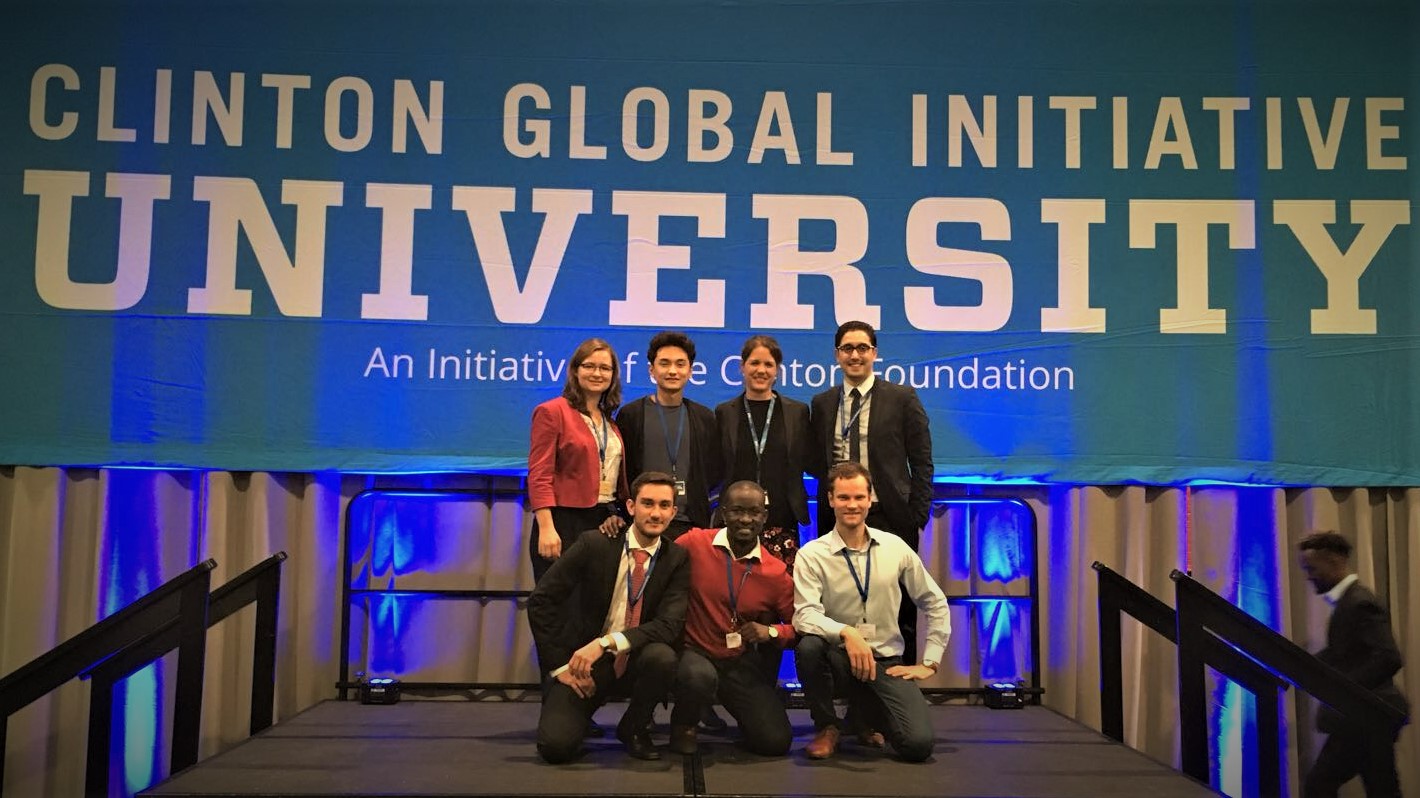 In October 2017, David Yenicelik and I (Michael Yared) took part in the Clinton Global Initiative University (CGI U) at Northeastern University, in Boston.

Former U.S. President, Bill Clinton’s non-profit organization, CGI U gathers like-minded students together for this annual event. Known as “Social Entrepreneurship,” students participating in CGI U work on projects that make a positive impact on the world.

“Social Entrepreneurship combines the good intention of non-profit organizations with the effectiveness of a start-up company to maximize impact.”

At the conference, we networked with ambitious student and social entrepreneurs and learned what it takes to create an impactful and successful initiative. Listening to the success stories left me feeling inspired.

David and I applied to CGI U with our own project, called SPARK. The project addresses government high school education systems in the world that are inefficient and make poor use of technology and the effective strategies of cognitive science research. SPARK aims to build a new education system that takes advantage of technology and modern research so that poor countries can teach more students, more effectively, and for a lot less money.

On the first evening of the conference, Bill Clinton welcomed all 1,000 participants in person. He explained that in order to create an impact, one must transcend racial, political, and geographical barriers starting with an open mind – a “blank slate.” 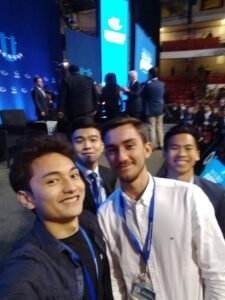 ETH undergrad students Michael and David with Bill Clinton (in the back).

On the second day, Madeleine Albright, who was the Secretary of State under the Clinton administration and is currently an advocate for women and refugees, joined a panel on creating opportunities for migrants. The in-depth discussion evolved around the questions: how migrants made the United States what it is and why it is important to continue to recognizing their contributions by giving migrants a platform to make an impact. These points seemed to resonate with the participants, who come from minority backgrounds.

After the introductory panel, we joined a discussion about creating impactful projects. Here, Vanessa Kirsch shared how she overcame racial biases and difficulties as an immigrant and eventually became a professor at MIT. She also created the successful organization, “New Profit” that helps social entrepreneurs obtain venture capital to launch and expand their initiatives. You should check out her story here.

Impressions from the Clinton Global Initiative University (CGI U) 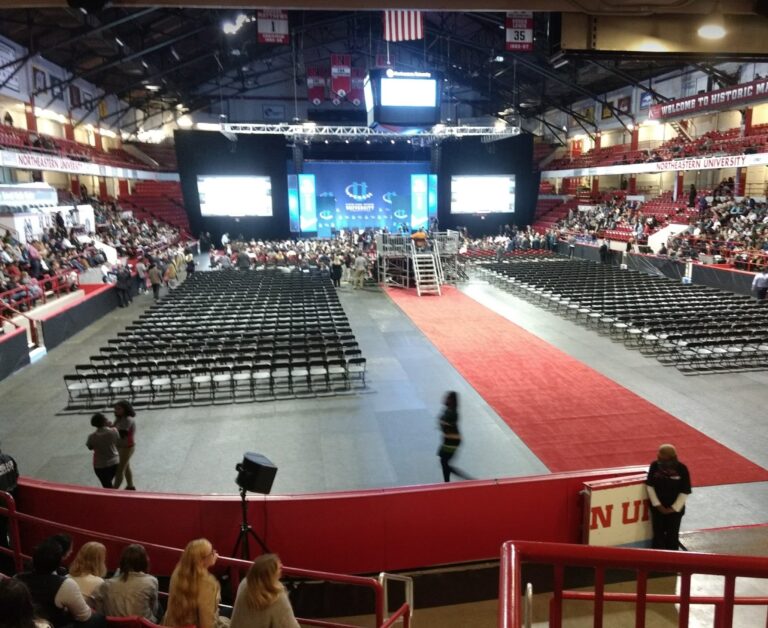 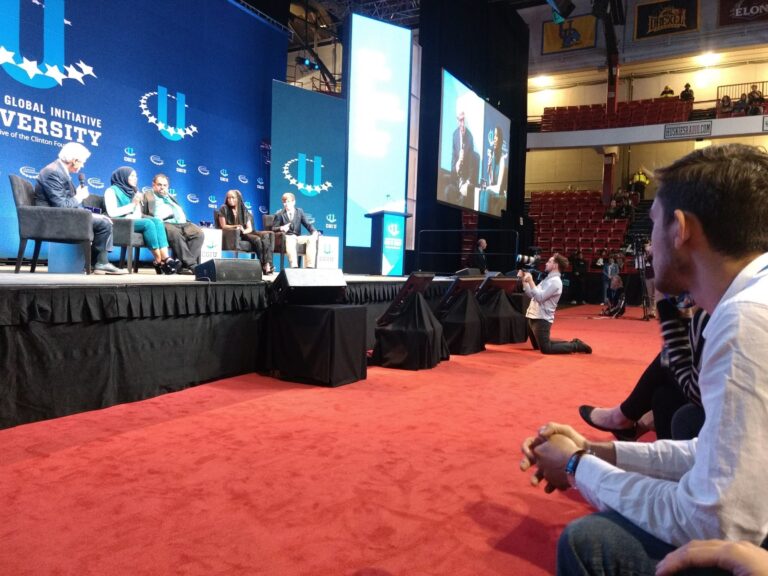 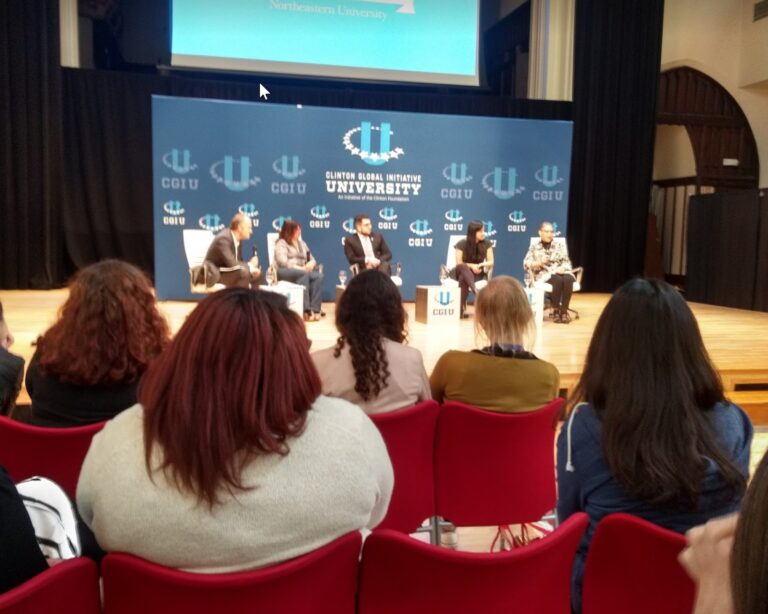 In another discussion about preventing sexual abuse on campus – a serious issue for U.S. universities, Amanda Nguyen told us her story. While in college, Amanda was raped. To make matters worse, she found it difficult to get “rape kit” – a kit used to gather DNA and other evidence. Once provided to the authorities, evidence gathered from the kits was often legally dismissed under certain conditions. Her frustration with this process prompted her to launch her own initiative called, “Rise” and to advocate for laws that fight against sexual assault. Since the launch of her company, Nguyen and her supporters have successfully lobbied to pass 10 impactful laws that protect sexual assault victims.

The final day of CGI U always ends with a community outreach project. This year we helped clean a playground in the middle of a poor neighborhood. It was a symbolic first step in creating an impact that improves the lives of other people.

It is wonderful that ETH Zurich, the world’s “most awesome” university, supports such projects.
Michael Yared, undergraduate student in computer science.

While there is much focus at ETH on creating the next breed of top-notch engineers, scientists, and entrepreneurs, social entrepreneurship projects are less prominent. Social entrepreneurship matters, particularly because it has a noble goal to make a positive impact in society. It represents what ETH is all about combining the entrepreneurial mindset – thinking of novel ways to solve societal problems – with making a huge impact. One of the main problems that non-profit organizations face is the challenge of funding. Social Entrepreneurship tries to find good solutions – ones in which investors wish to pour money. In fact, there is a global trend of non-profit organizations shifting to a more effective, company-like approach in terms of how they do things.

By going to CGI U, David and I were able to talk with other social entrepreneurs from all over the world. We exchanged ideas, discovered success stories, and spoke with incredible people (all the guests were incredible in some way). Although it is hard for us to measure the impact that the experience will have on our projects and lives, it has certainly left us inspired and wanting to do more.

Each year, former U.S. President Bill Clinton hosts the Clinton Global Initiative University (CGI U) meeting. The meeting is host to students, university representatives, topic experts, and celebrities from around the world allowing them to come together to discuss and develop innovative solutions to pressing global challenges. Each student participating in CGI U proposes a “Commitment to Action” that addresses challenges in education, the environment, human rights, the alleviation of poverty, and public health. ETH Zurich, as a member of the initiative, provides mentorship and limited seed funding to support its students in implementing their projects.

Six students from ETH Zurich participated in this year’s CGI U meeting. There they presented their Commitment to Action ideas ranging from the creation of an education app for refugees, sending unused scientific equipment to developing countries, and internationalizing the successful concept of the student-run sustainability project in Switzerland, to a Social Incubator Program in Gambia. 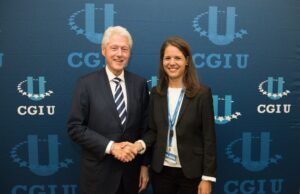 David Yenicelik and Michael Yared are both Computer Science undergraduates at ETH Zurich. They took part in this year’s CGIU conference through their project Spark. Spark aims to build a more effective education system by leveraging modern research of how we learn and technology. 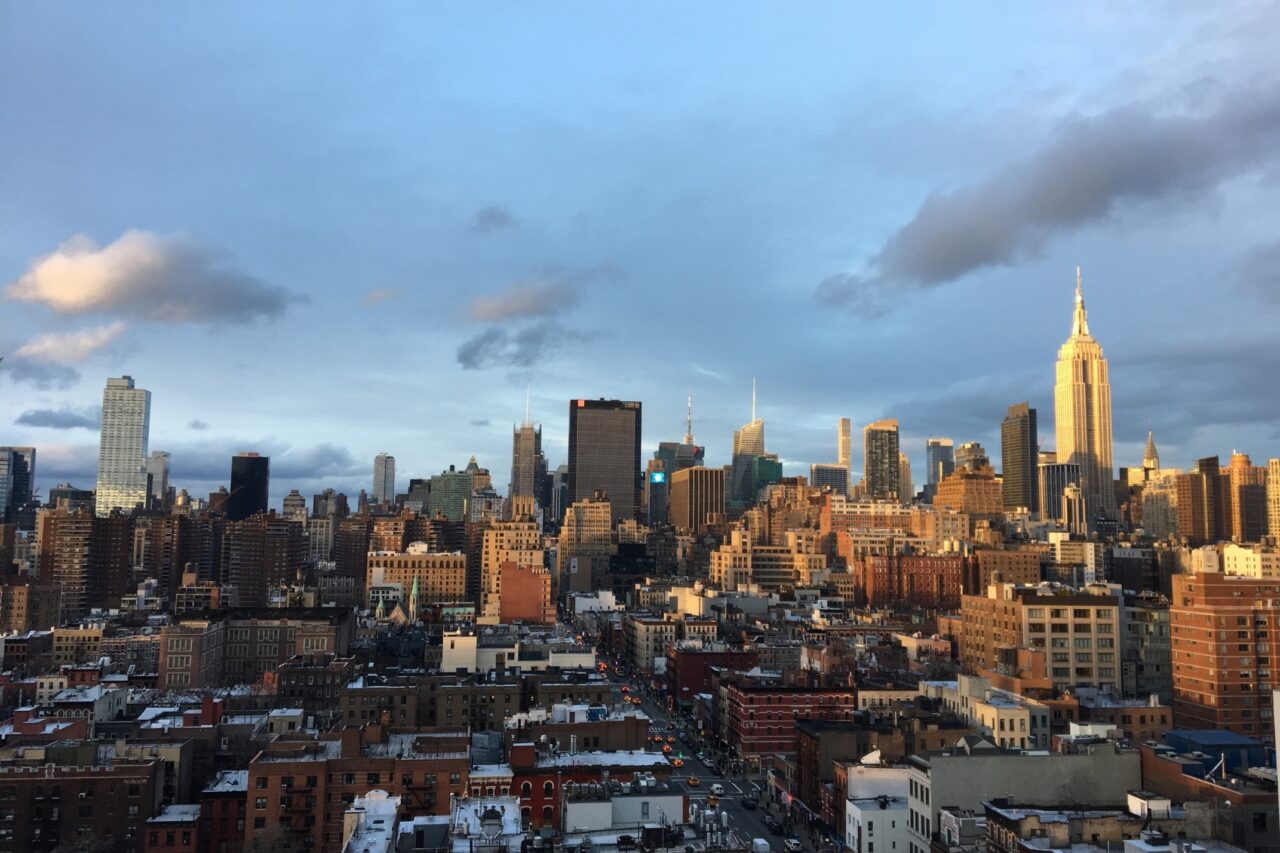 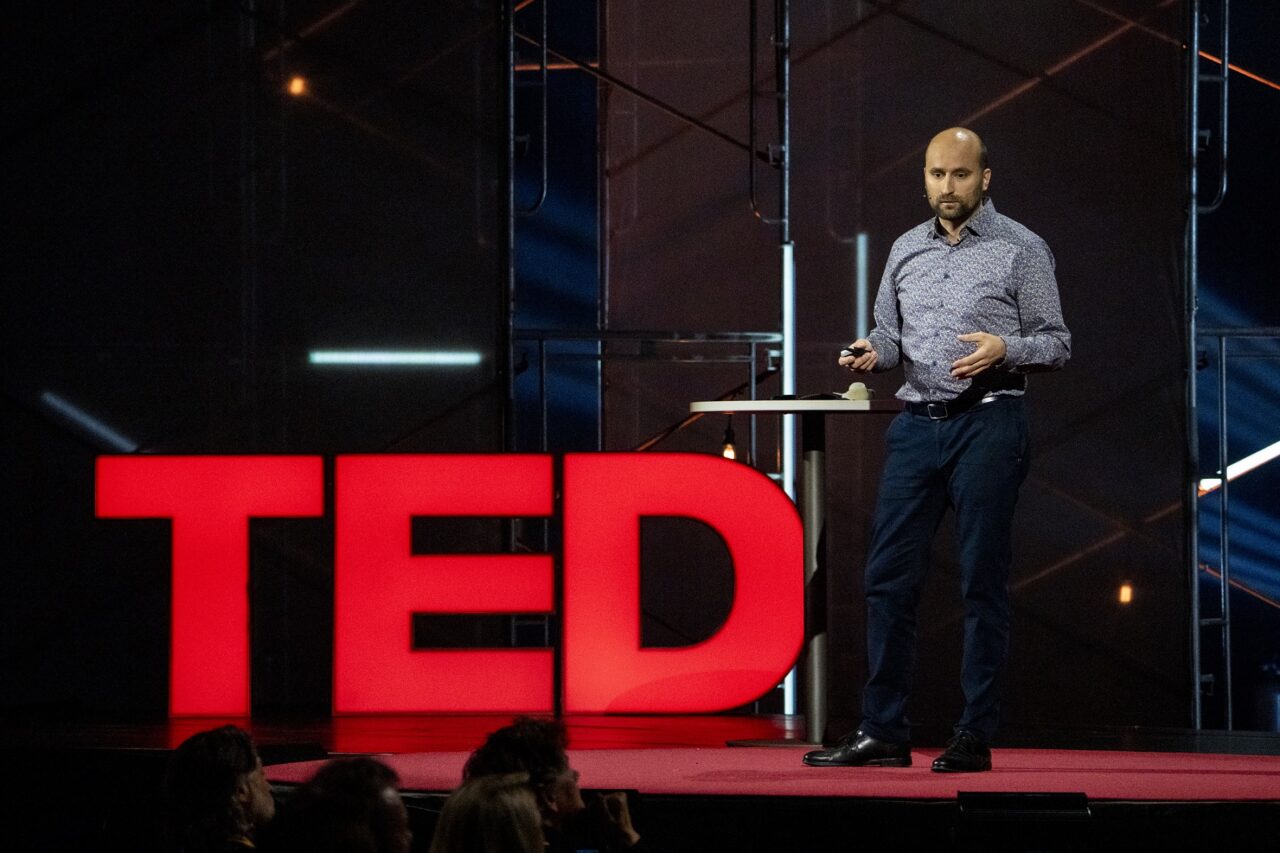 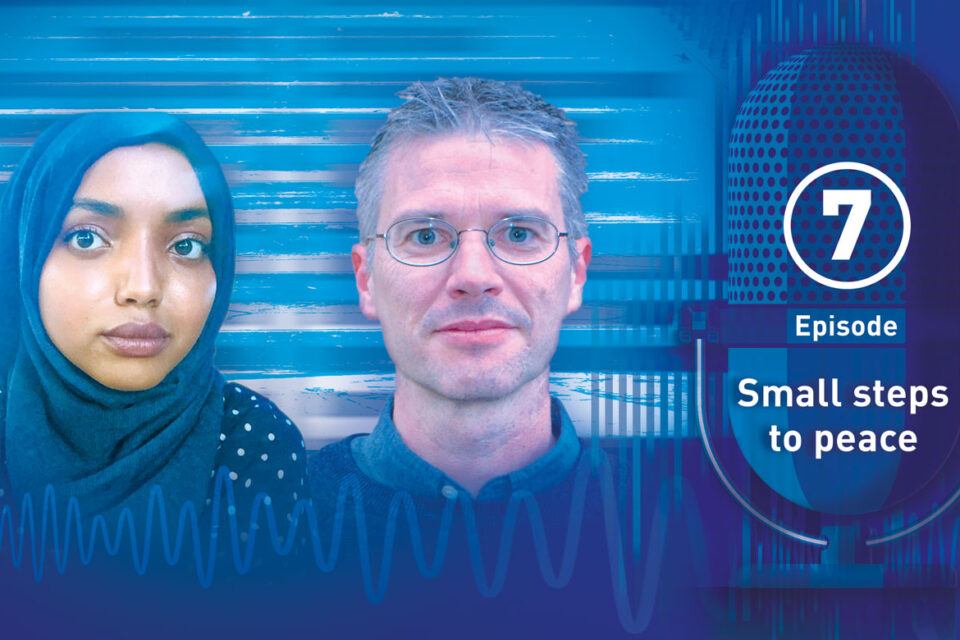 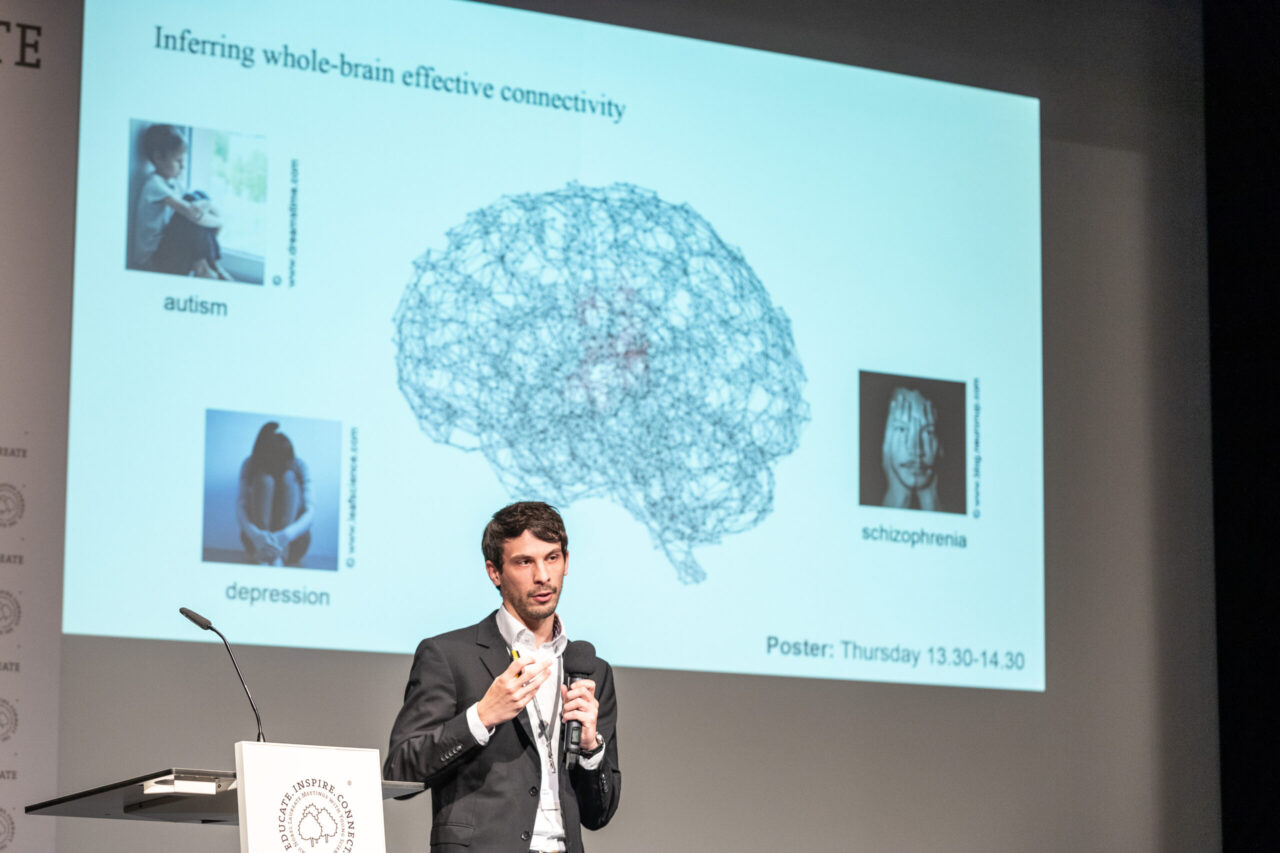 Inside the Lindau Nobel Laureate Meeting