Do It Yourself 3D printing: plastic waste production, or practical potential? This was what ETH student Maximilian Theimer tried to find out by building a BMX form factor bike frame on a self built Fused Deposition Modelling (FDM) 3D printer. 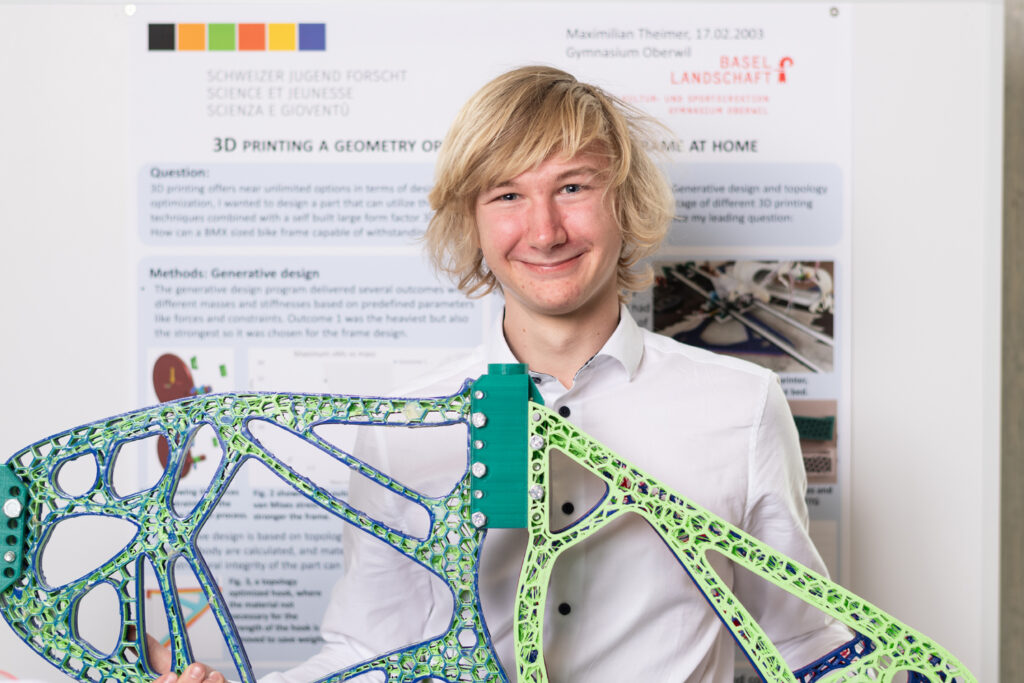 My Project at the SJF contest. Photo credit: SJF.
My name is Maximilian (Max) Theimer, I am 19 and just started studying mechanical engineering at ETH Zurich. I have two main passions. The first one is 3D printing; and the other is everything that has two wheels.

My love for 3D printing started when I was about 13 and I got my first 3D printer for Christmas. It was a Chinese i3 style machine that you obviously had to assemble yourself and came with no instructions whatsoever. It took several months until I could successfully print the first part, and I had to learn most things on my own from online forums. Compare this to now, when a 180.- CHF 3D printer can be assembled in under an hour, and prints perfectly fine… So much has evolved in a relatively short time. 3D printers are now perfectly useful for prototyping and creating small parts, but what about the other extreme? Large parts that are rigid and useable, can they be “printed at home”?

I decided it was time to 3D print something big and functional, that I could then try out and instantly feel if it works, but what to print? How about getting inspiration from my second passion, and building a bike frame! Or to reduce the scale a bit, as the venture was already quite complex, a BMX-size bike frame, still rideable and only a bit smaller than a normal bike. The challenge was set. 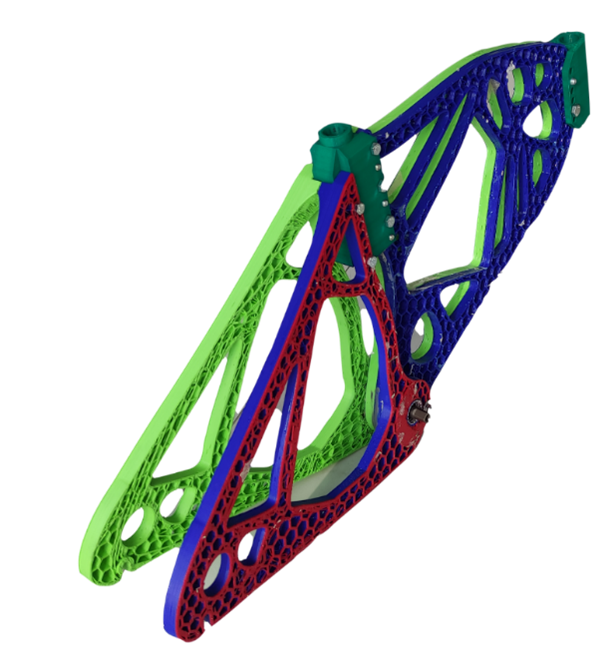 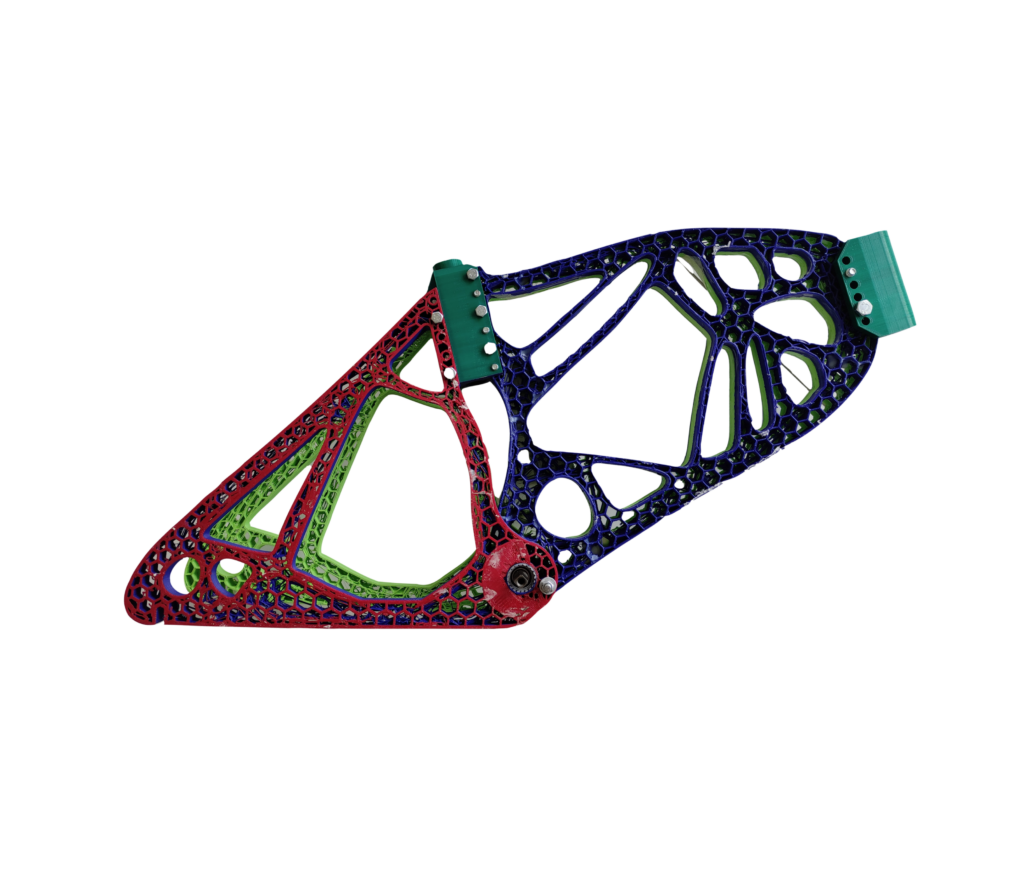 Side view of the frame. Photo credit: Max Theimer. 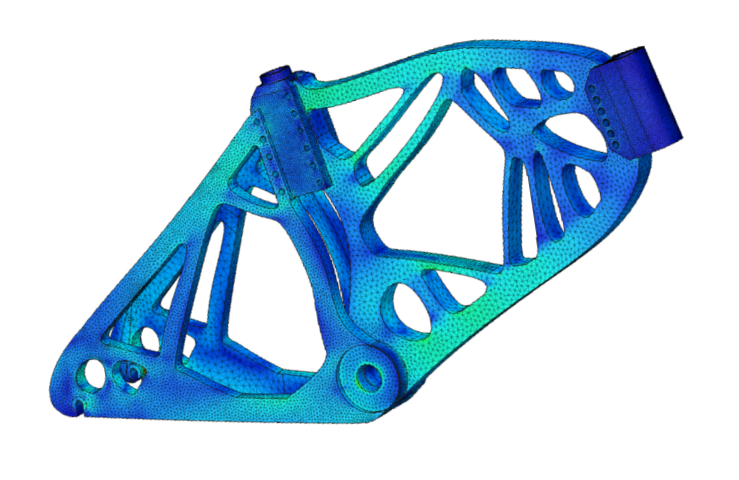 Finite element analysis of the frame. Photo credit: Max Theimer.
I knew from the beginning that a 3D-printed frame would not be as rigid as a steel frame, so I had to do everything that I could to make the frame as strong as possible. This included utilizing topology optimization, which is used to make a shape as rigid as possible, while simultaneously reducing the mass, thus you receive the optimal part, being light weight and rigid. In my case, topology optimization used forces customised to my weight, making the frame only as rigid as it had to be. Furthermore, the whole frame shape and size was customizable, like the handlebar position, or the seat-mount height. 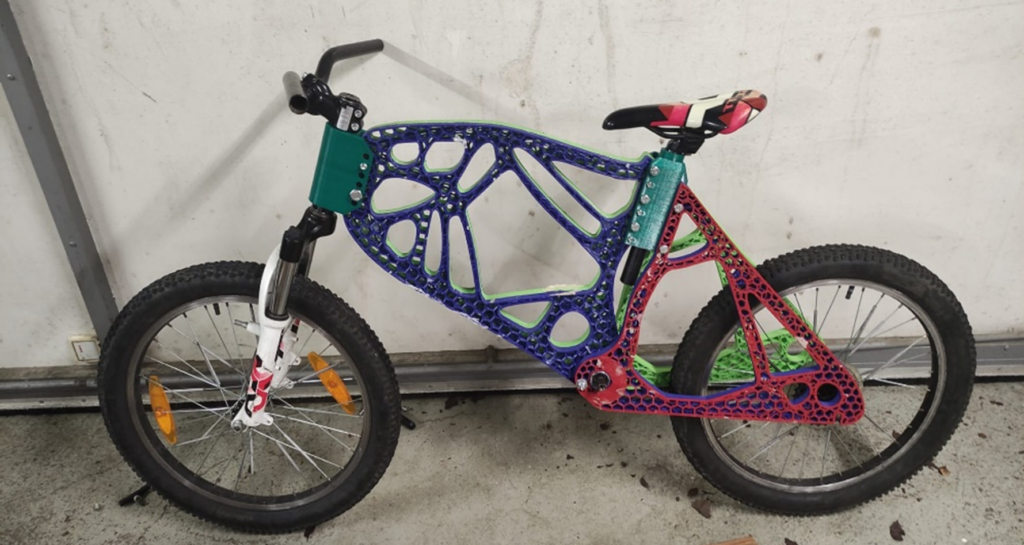 The 3d printed frame fully assembled. Photo credit: Max Theimer.
Of course, a normal 3D printer was not going to cut it size-wise, with the absolute largest build area you can currently find in the consumer space being 450mm x 450mm. I needed something bigger, so I built an alternative myself, based on an open-source CNC mill, heavily modified to be a reliable large form factor 3D printer, whose final build area ended up being over 1 m2. Some material testing was done to find the most suitable filament, but once I had the design and the printer, the only thing left to do was print the frame. In total I spent less than 500.- CHF on printer and frame combined. 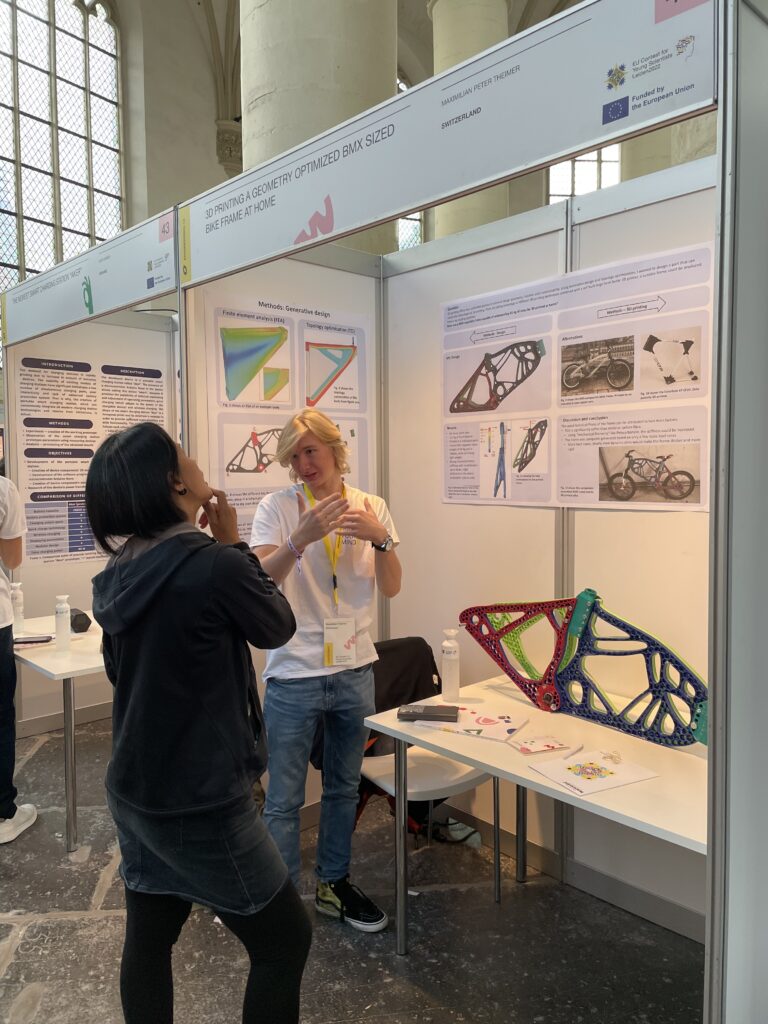 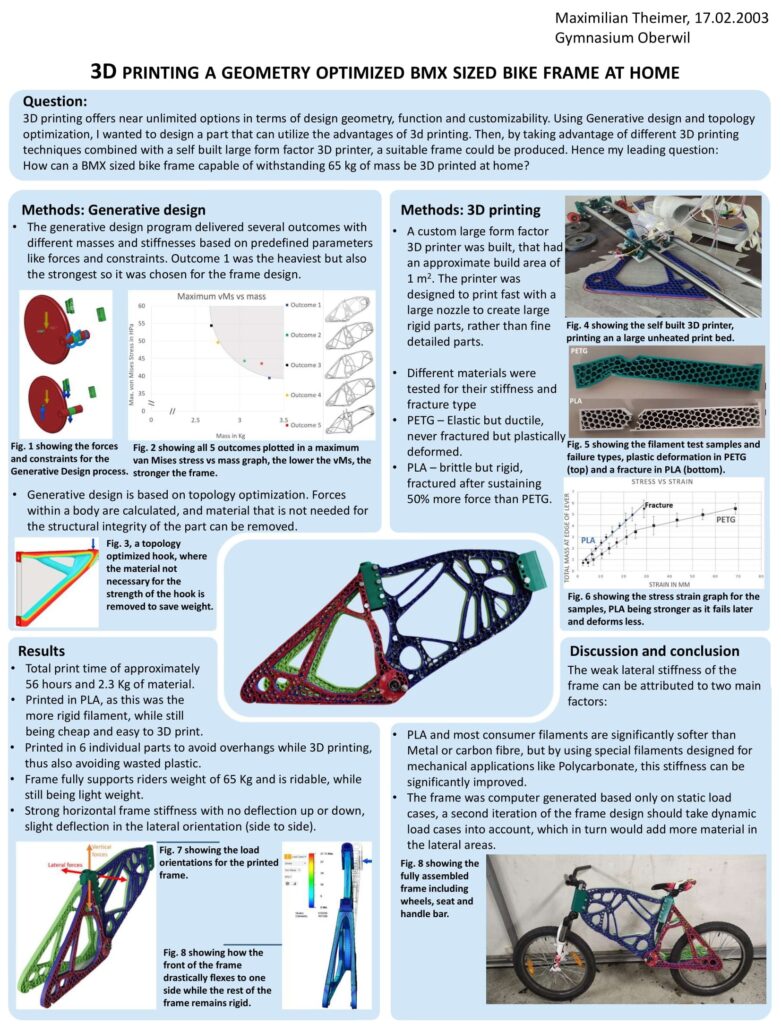 Poster of the project. Photo credit: Max Theimer.
I also made this the topic of my Matura thesis, which I entered in the Swiss Youth in Science Competition (SJF). All participants were allowed to present their projects to an audience of experts and the public in Lugano. As a special prize from that competition, I was allowed to join the Swiss delegation as one of three at the EU Contest for Young Scientists (EUCYS) in Leiden Holland. This was similar to the SJF competition only internationally competing against first place winners from all around Europe. The people I met and projects I saw there were all amazing. It was wonderful to meet so many like-minded individuals. At this competition, I was very lucky to win a special donated prize from the EIROFORUM, which allows me to visit the XFEL Free Electron XRAY-Laser in Hamburg for a week.

Do it yourself 3D printing is definitely not plastic waste production. I feel this project showed what can be done and what still might be in store for the future. For me that means I will keep pushing the boundaries to further extremes, maybe not with another bike frame but rather by experimenting with the technology itself. Plain 3D printing is good, but what about combining it with composites like carbon fiber? 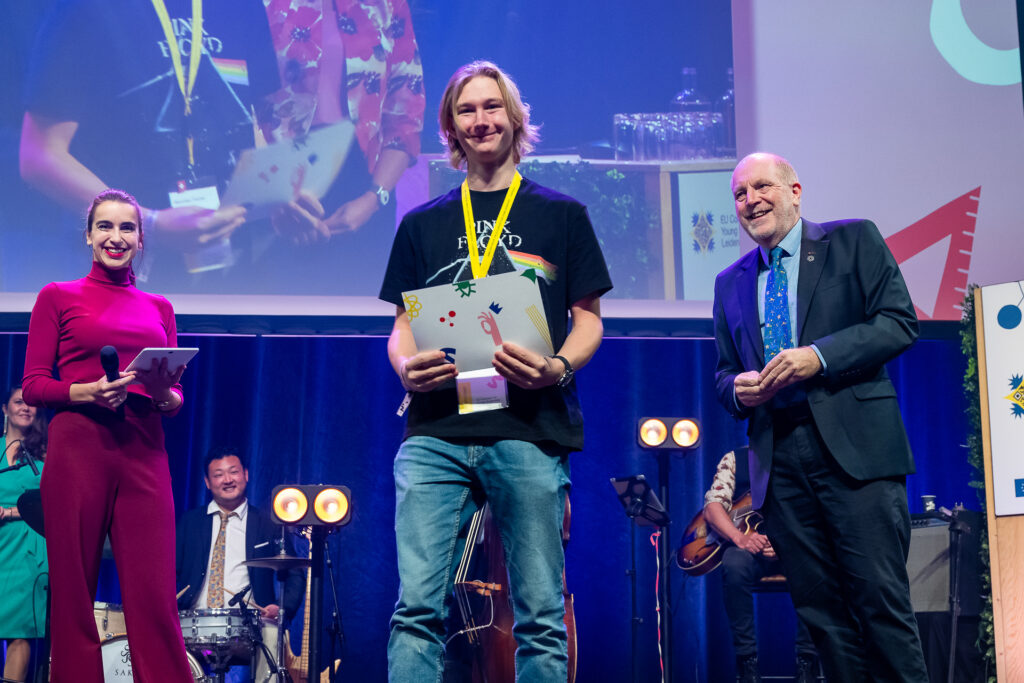 Receiving special prize at the EUCYS contest. Photo credit: EUCYS.
About the Author 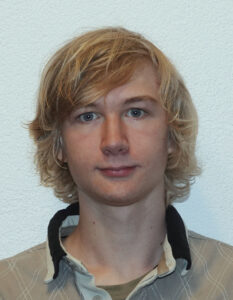 Maximilian Theimer
Born in 2003 in Australia, I moved to Switzerland aged four. My passion lies with everything around technology, teaching myself along the way. I’m a film enthusiast, boarder (skate / snow / surf) and enjoy climbing.