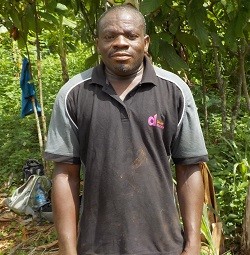 John has been growing cocoa in Ghana his whole life. His attempts to replant cocoa have become more difficult in recent years due to the changing climate, so he was looking for new opportunities to establish his crops. Other farmers from his cooperative Kuapa Kokoo Farmers Union (KKFU) informed him that in the frame of a project called "Alliances for Sankofa" they were starting to test a new system called “dynamic agroforestry” and asked if he would like to participate. John was intrigued and thus joined the project. 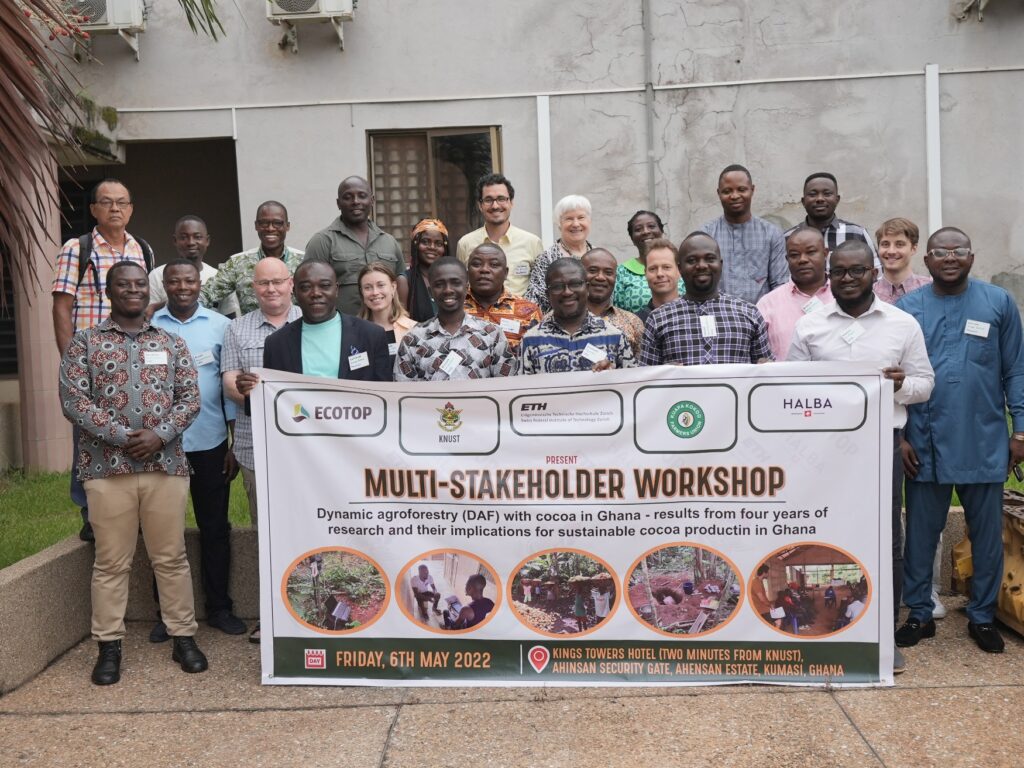 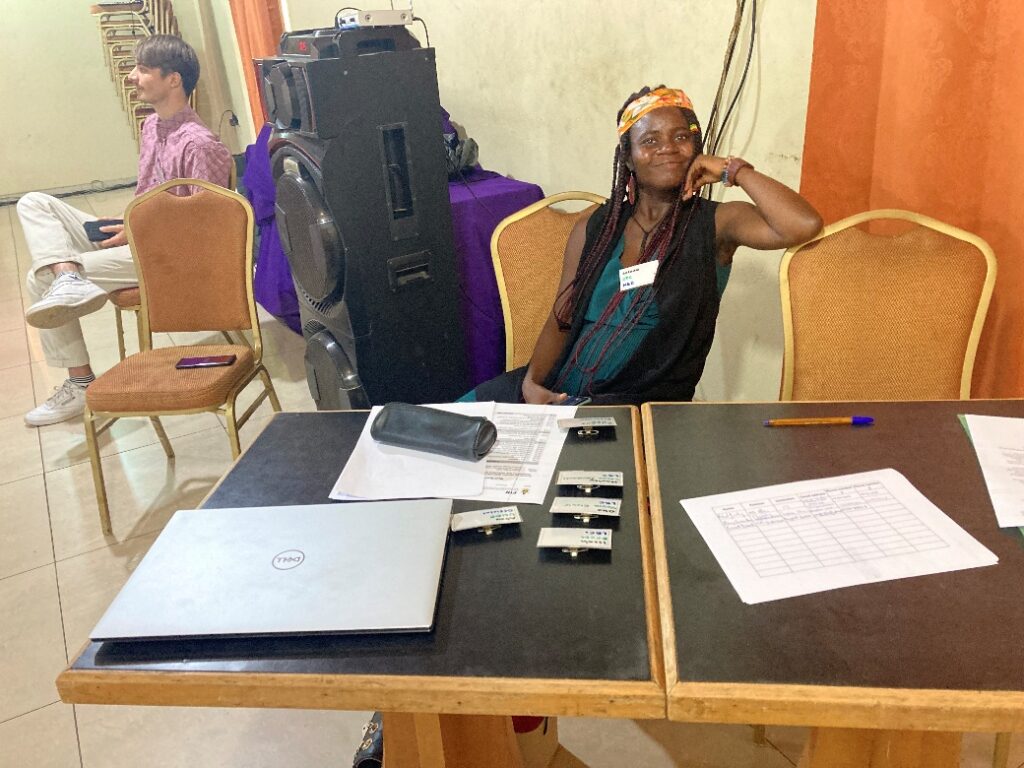 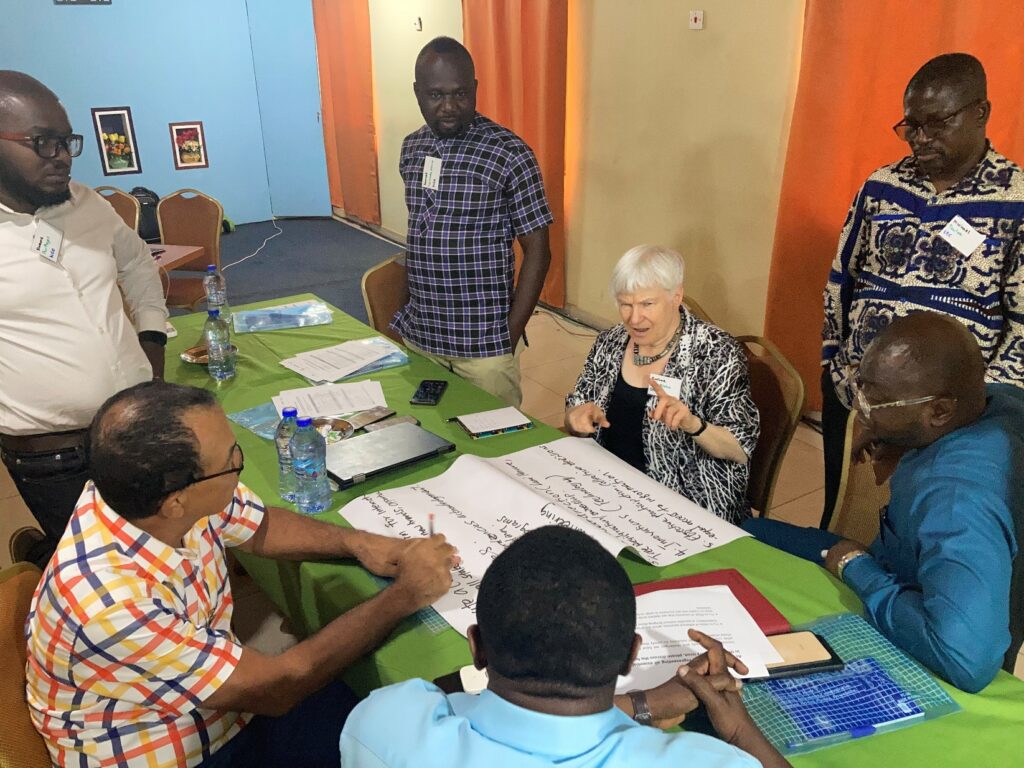 In dynamic agroforestry, farmers plant very densely a lot of different trees and crops, and then they shape the trees regularly by cutting, which leads to several layers of different trees on top of each other. This method can restore soil fertility and help mitigating and adapting to climate change, whilst improving the livelihoods of many smallholders. At the same time, the high labour- and knowledge-intensities of dynamic agroforestry may pose a great challenge for farmers.
In 2018, John established his first plot with the dynamic agroforestry method and immediately realized this was something different from his former practice; no burning, no chemicals, no fertilizers, and a variety of trees and crops all planted at the same time in a neat layout.
The same year, I approached him about doing research in his fields, in order to better understand what was going on. John liked the idea and agreed to take part in the study. He continued to work on his farm, applying the knowledge he received from his regular agroforestry training sessions provided by the Sankofa project. After the first dry season, he observed that his cocoa trees were thriving, and seemed to grow more vigorously compared to what he did before. When I returned to discuss the data collected in his fields with him, my data confirmed what he had observed himself: Through continuous application of organic matter, dynamic agroforestry not only improves soil fertility, but also increases the soil water, and thus leads to better survival and more robust growth of his cocoa trees. 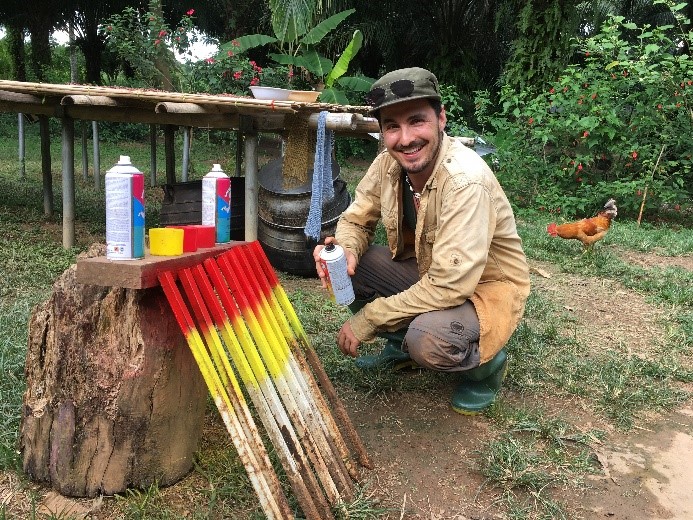 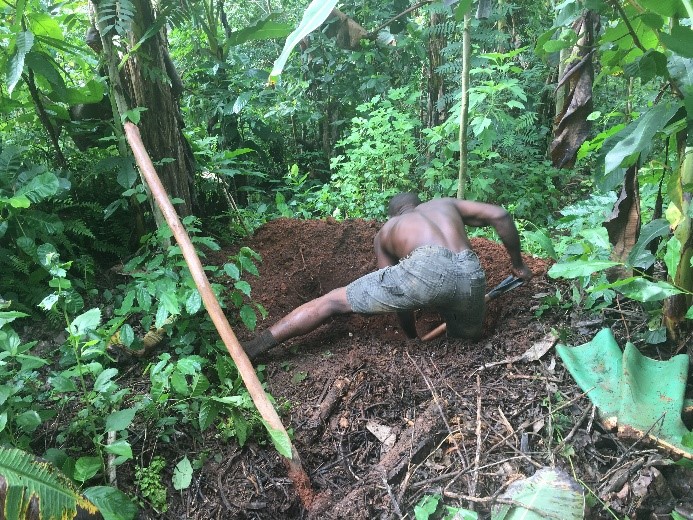 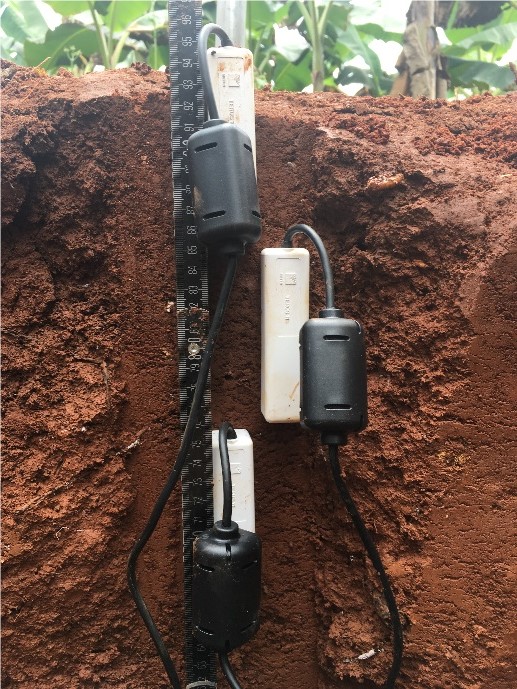 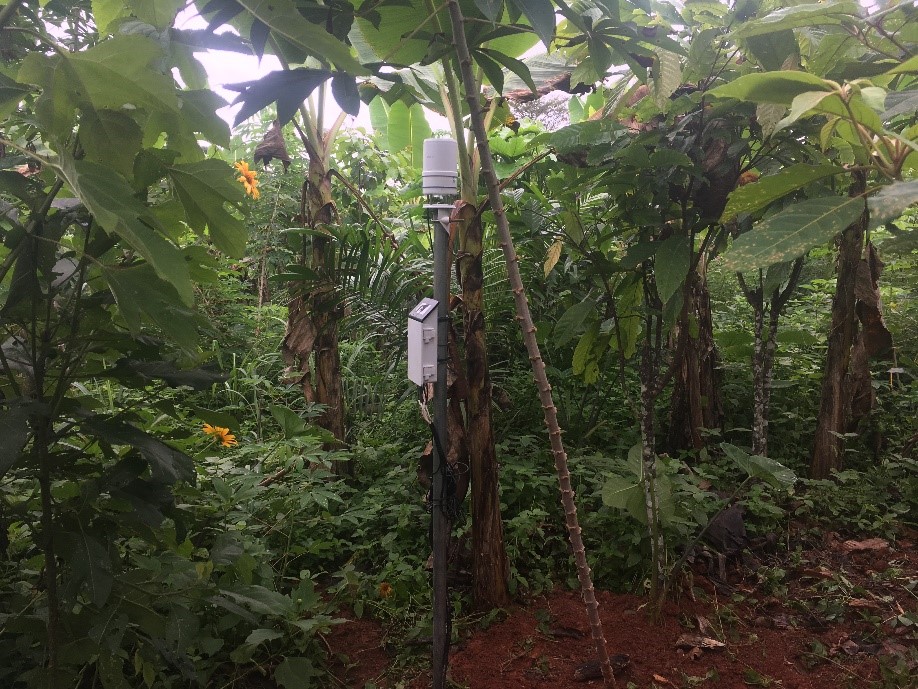 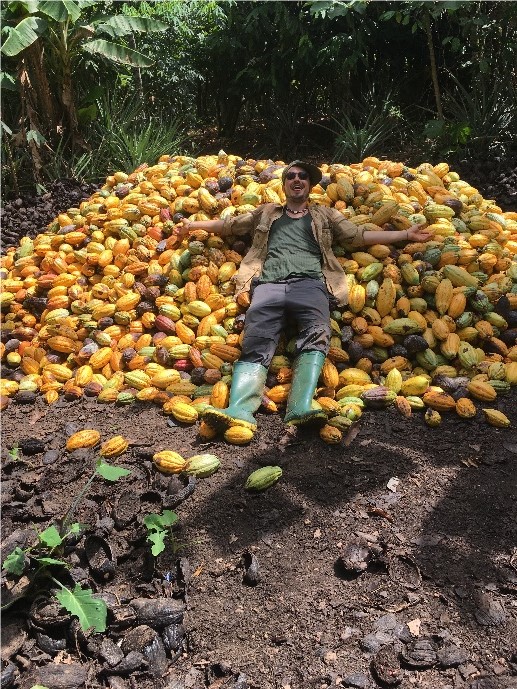 Slide the bar under the pictures to scroll: Marking pegs with bright colours for demarcation of plots (first picture) on which pits are dug (second picture) to install soil sensors for long-term assessments of soil moisture and temperature (third picture) together with climatic data, which is stored in cloud data loggers and available for download anywhere in the world (fourth picture). The aim is to recommend optimal growing conditions for favourable cocoa growth in order to enable abundant harvests for the benefit of farmers (fifth picture).

From conversations with John, I learned that he is convinced that this is a better way to establish his cocoa crops. The harvests of the diverse crops in the first year helped him feed his family — he could even sell the surplus produce in the market. However, he also has to put a lot more work in the dynamic agroforestry field. He still wants to observe the development of the cocoa trees before he draws his conclusion about how productive and profitable the system really is. He understands dynamic agroforestry to be a long-term investment to maintain a healthy environment and make a living at the same time. 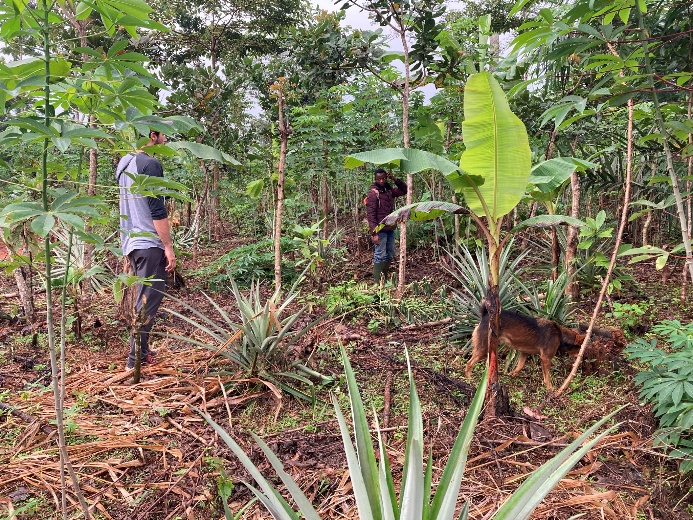 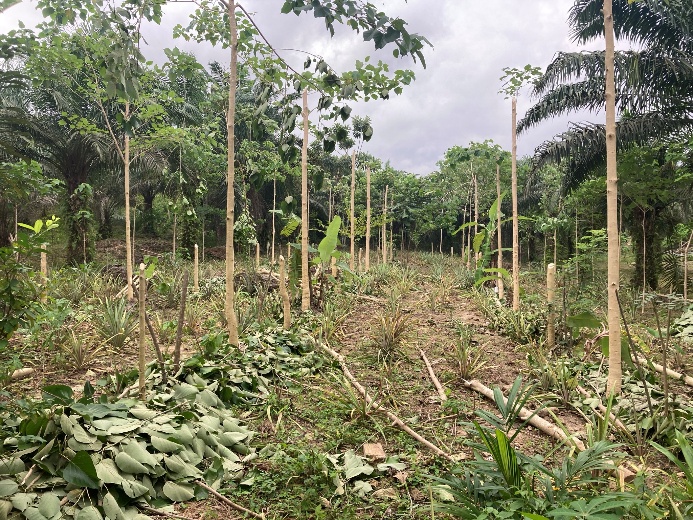 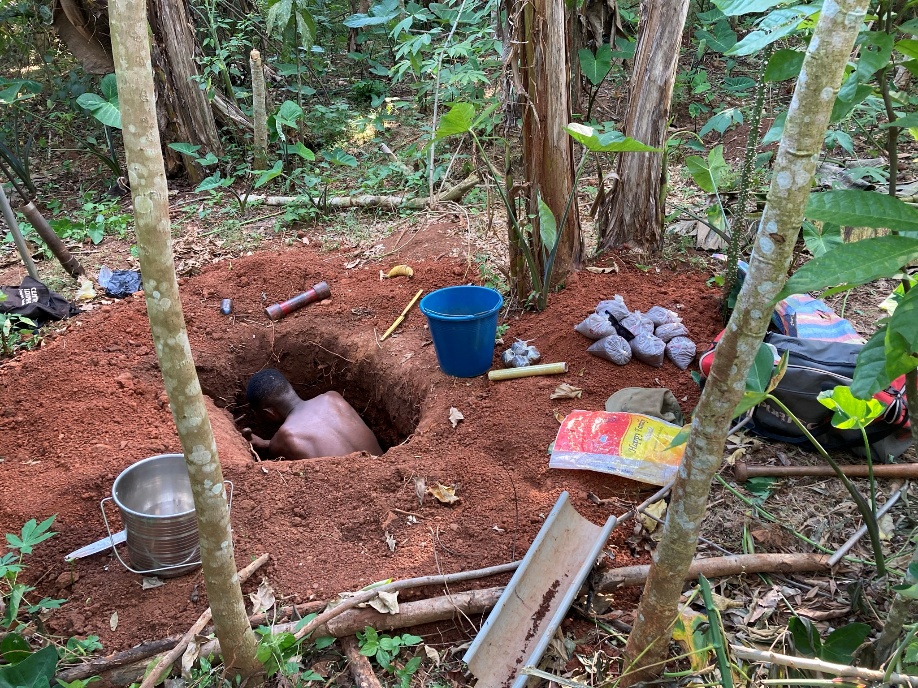 Dynamic agroforestry plots after maintenance pruning in the classic (random) and savannah (line) design.Taking last disturbed and undisturbed soil samples using cores at the same depth where we measured soil temperature and water in order to calculate water-filled pore space, a better indicator for plant-available water than mere volumetric water content (which is the direct output from the sensors).

In 2022, I discussed the results of the study with stakeholders in the cocoa value chain of Ghana to see how this promising production system could be integrated into existing programs and policies. The stakeholders were very interested in the new approach and expressed their need for a common digital platform to build trust and start new initiatives to support dynamic agroforestry. So yes, fighting climate change and restoring soils with chocolate is possible, but it needs a sincere long-term commitment from both farmers and chocolate manufacturers and will ultimately lead to win-win-win scenarios, win for the farmer, win for the company, and win for the environment. 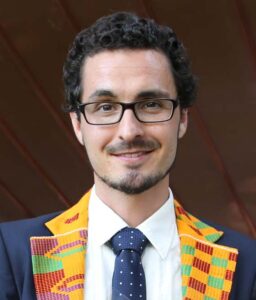 About the Author: Christian Andres
I am a Post-Doctoral Research Scientist in the SAE group at ETH Zurich in sustainable cocoa production systems. From 2011 to 2019, I worked at the Research Institute of Organic Agriculture (FiBL), where I compared organic vs. conventional cocoa production systems in Bolivia for their agronomic, economic and ecological performance. From 2015 to 2018, I did my PhD on the cocoa swollen shoot virus disease in Ghana. I continue to work in the country on dynamic agroforestry systems with cocoa for my Post-Doc. I am the founder of the Swiss-based association UP Development (www.up-development.org), which is implementing projects in Ghana with the local partner organization OPC (www.obrobibini.org), which I also founded. They have established a centre of excellence for sustainable social enterprises and circular economy, as well as a 20 hectare organic agroforestry farm.
Acknowledgments
This project was financially supported by the Coop Sustainability Fund through their funding scheme “Sustainability in Food Value Chains” at the World Food System Centre (WFSC), by the Department of Environmental Systems Science (D-USYS) through their funding scheme “CO2 emission compensation fund”, and by ETH for Development (ETH4D) through their funding scheme “Research to Action Grants”, all at ETH Zurich. The ETH4D grant aims to ensure that research results are being used, implemented, and disseminated. Applications can be submitted at any time during the year and are accepted on a rolling basis. If you want to learn more, click on the button to the right.

The project "Alliances for Sankofa" is supported by the Coop Sustainability Fund and HALBA, the Swiss Platform for Sustainable Cocoa (SWISSCO) and the State Secretariat for Economic Affairs (SECO), the Danish International Development Agency (DANIDA), the International Trade Centre (ITC) and Max Havelaar Foundation Switzerland. It is implemented by ITC together with KKFU and partners including Fairtrade Africa and WWF Switzerland. Technical support to the project is provided by Ecotop Suisse GmbH, South Pole and the Nature and Development Foundation (NDF). The Sankofa project was interested in scientific monitoring of the project to have solid data on the benefits of DAF for farmers and, to this end, has established a collaboration with the ETH Zurich.