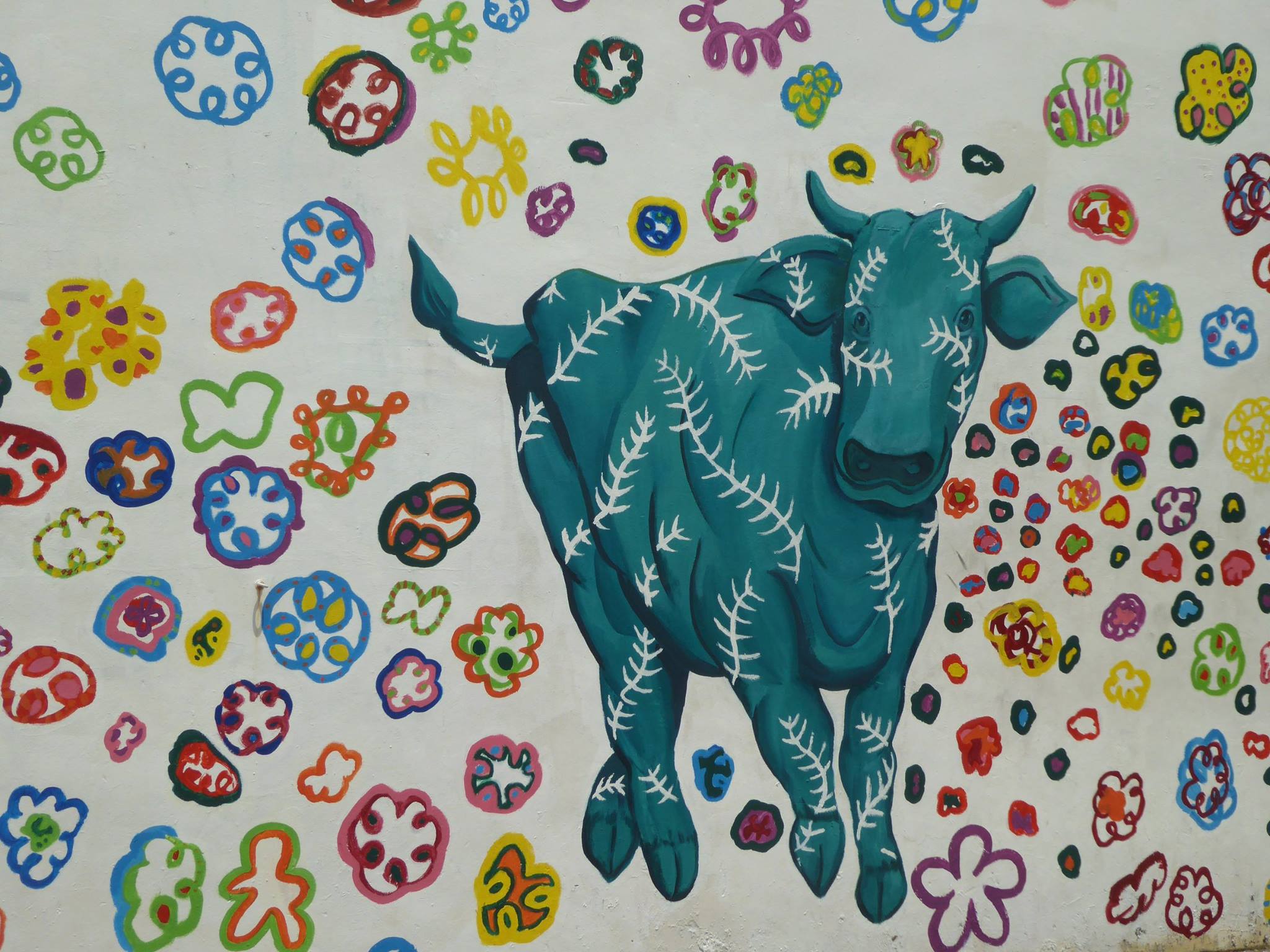 An ETH Alumna, now living in the megacity of Singapore, pines for the rustic, old fashioned cows of Hönggerberg, and ruminates on the cross-cultural significance of cows.

A few weeks ago, I met up with another ETH Alumni in Singapore, and we reminisced our respective times at ETH Zurich. We both had our offices at ETH Hönggerberg, where the cows passed constantly by our office windows. We both missed the smell.
Are there actually any cows in Singapore, apart from on the menus? Strolling along the streets: yes, there are cows in Singapore! To be more precise, representations of cattle are present all over the megalopolis— cattle being the general term referring to both cows and bulls. At Hönggerberg, the cows graze to produce milk for drinking, or cheese and yoghurt. In Singapore, living cows and bulls are rare: nowadays, they can only be found at the dairy farm, unfortunately currently closed due to COVID. 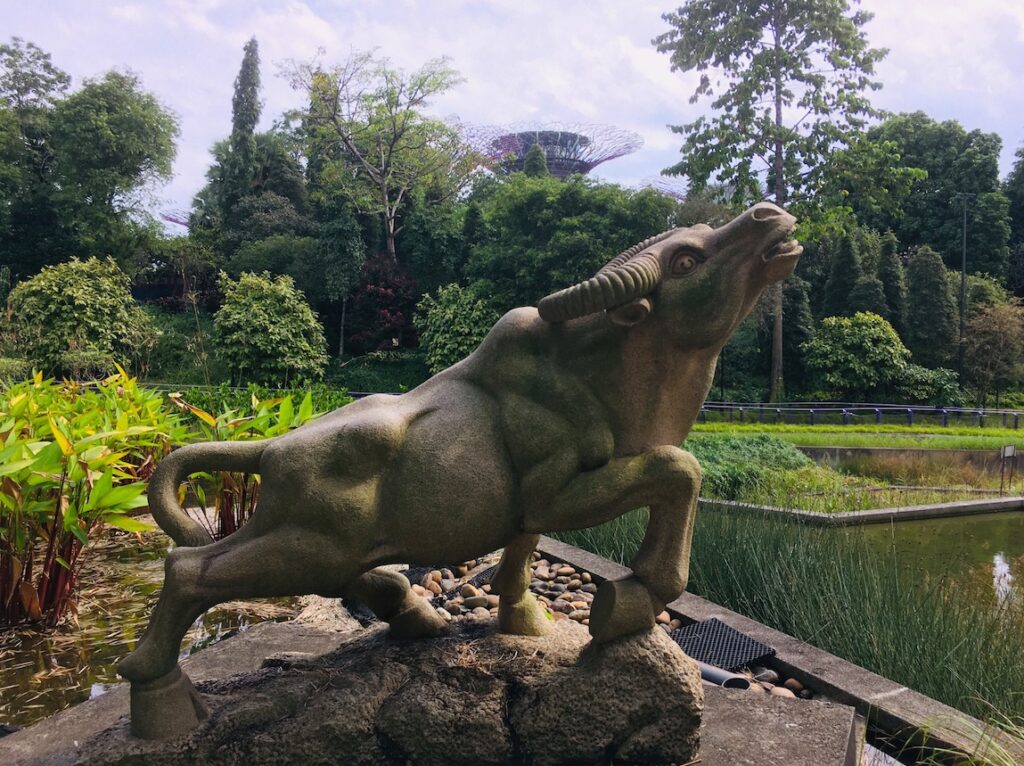 Sculpture of an ox to celebrate the Chinese New Year 2021, at the Singapore Gardens by the Bay. (photo credit: Hortense Le Ferrand) 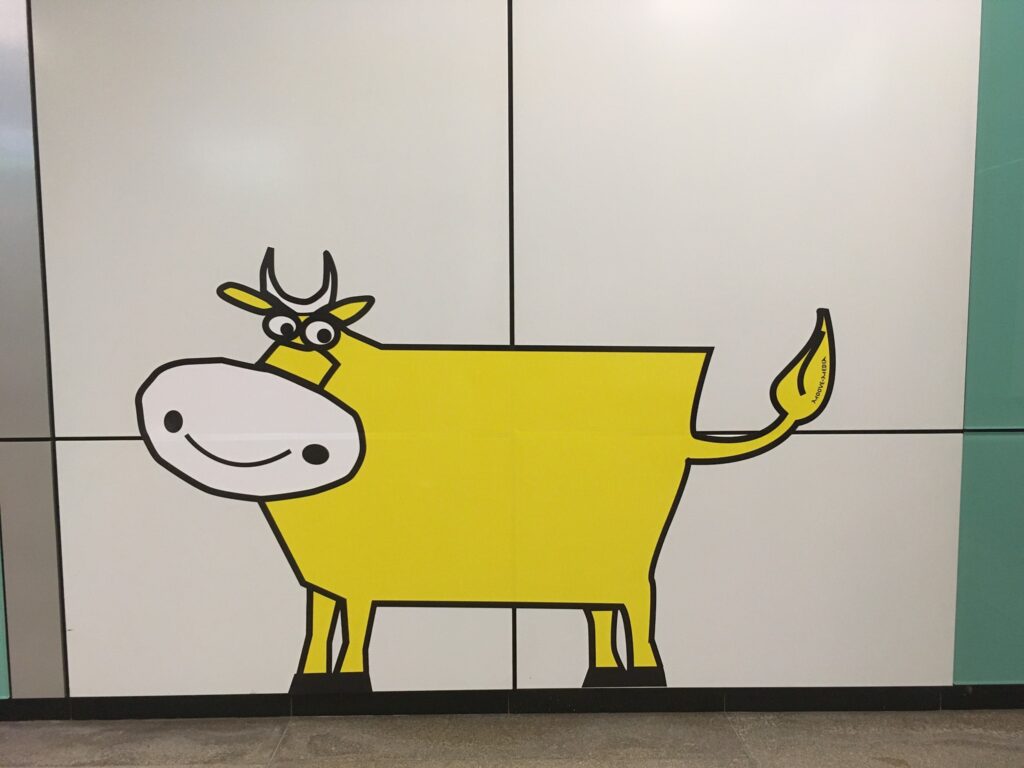 Cartoon of a cow in the MRT (Mass Rapid Transport) of Singapore as an advertisement for Moove Media. (photo credit: Hortense Le Ferrand) 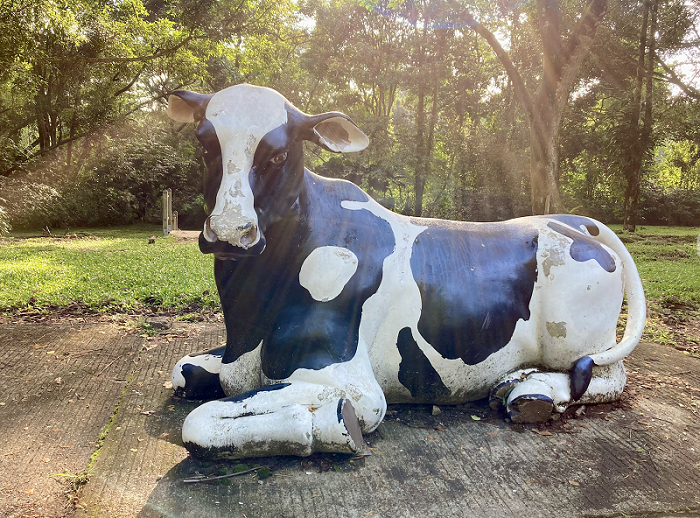 Statue of a cow next to the (closed) cow farm at the Dairy Farm Nature Park. (photo credit: Hortense Le Ferrand)
Indeed, Singapore is among the world’s most densely populated cities, a “megacity” with about 21000 people per m2. The city is now extending its landmass artificially over the sea, so there is little space to give cows to walk around on grass. Also, the green and wild spaces on the island are mostly covered with jungle, which hosts an incredible diversity of birds, mammals, and insects — and plays a key role is cooling the city. 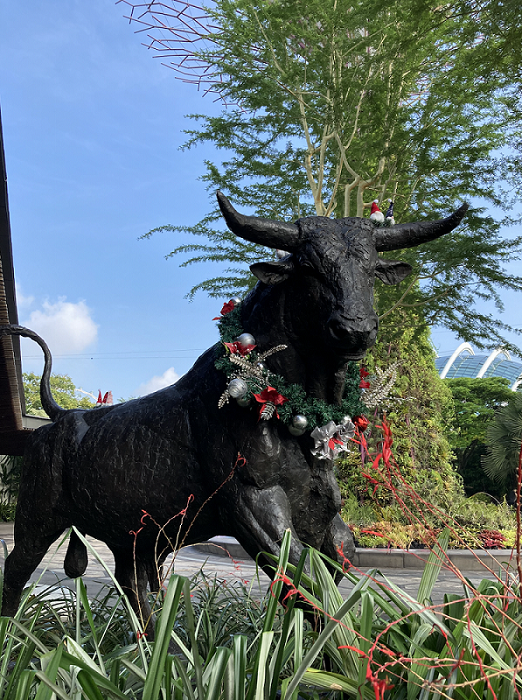 Sculpture of a bullock decorated for Christmas at the Gardens by the Bay. (photo credit: Hortense Le Ferrand)
Cows carry various symbolic meanings among the three dominant cultures, Indian, Malay, and Chinese, as well as the many other religions that cohabit in Singapore. For example, cows are sacred for Hindus and Buddhists. For people practicing Islam, which is the official religion of Malaysia, cows need to be slaughtered according to a specific ritual to be “halal”. On the other hand, beef is often present on the menu. It is thus interesting to see how different beliefs and habits can coexist in one place in harmony.
From a European perspective we may also forget that the consumption of cow milk and other milk-derived products is greatly reduced in Asia. This is because the enzyme to digest lactose is deficient among a large part of the population in this part of the world. This could explain why bulls are more often depicted than milk cows in pictures, and carry more symbolic weight than in Europe. In the past, in Singapore, bulls and other cattle were employed as a means of transportation, to pull carts and to carry heavy weights.
Despite the absence of the living animal, bulls and cows are equally represented in Singapore's streets and parks. I collected pictures of them: bronze sculptures that have now replaced the living animal, where it can be seen pulling a cart or carrying people; statues of sacred cows gracing Hindu temples, where they are usually peacefully seated atop the walls or roofs, gazing down at the pedestrians strolling underneath; paintings and sculptures of cows used to advertise restaurants. 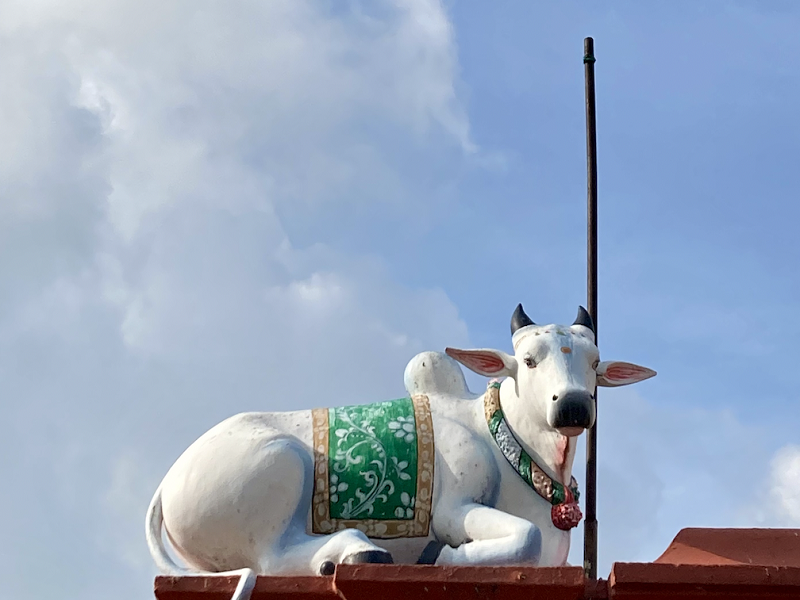 Another sculpture of a sacred cow from the Sri Mariamman Temple. (photo credit: Hortense Le Ferrand) 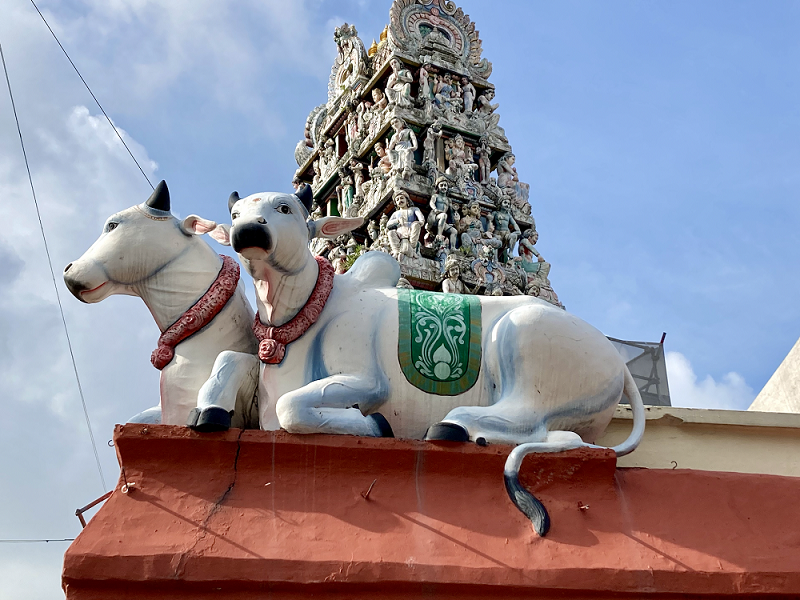 Sculptures of sacred cows decorating the Sri Mariamman Temple, a Hindu temple close to the Chinatown district. (photo credit: Hortense Le Ferrand)
2021 being the Chinese zodiac Year of the Ox, brought with it a bit more iconography: the ox is a symbol of diligence, strength, honesty, down-to-earth persistence, and wealth. Statues depicting powerful strong oxen and bullocks (bulls castrated to make them more docile), decorated the iconic Garden by the Bay, with its artificial trees and flower domes. An illustration of how well the natural and the artificial, various cultures and religions, merge in the megacity.
The Year of the Tiger follows the Ox, best wishes of prosperity for the Chinese New Year! 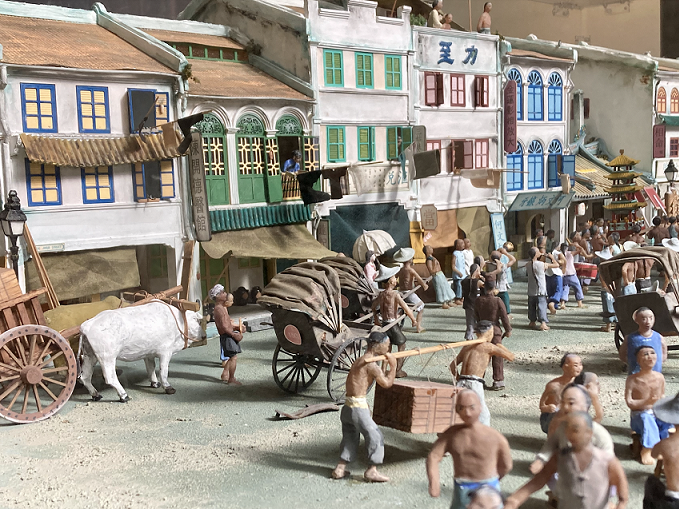 Miniature reproduction of the centre of Singapore at the entrance of Amoy Boutique Hotel. (photo credit: Hortense Le Ferrand) 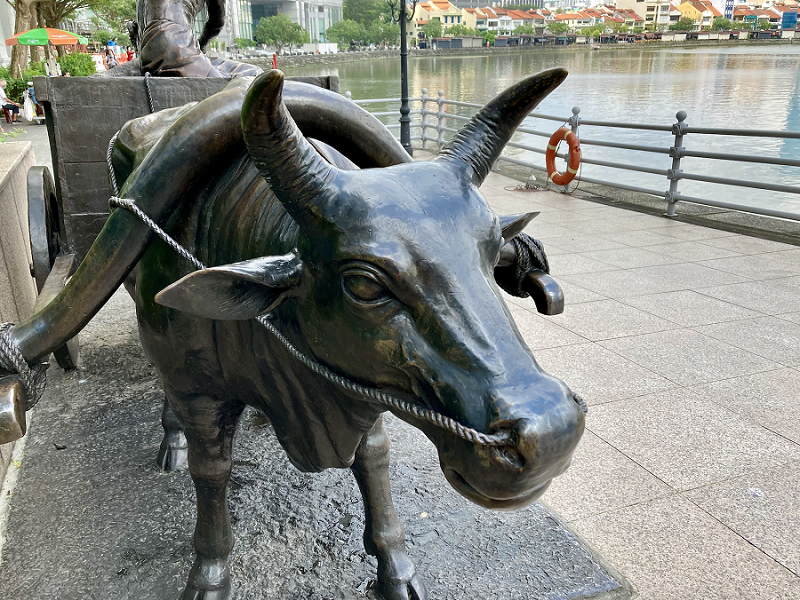 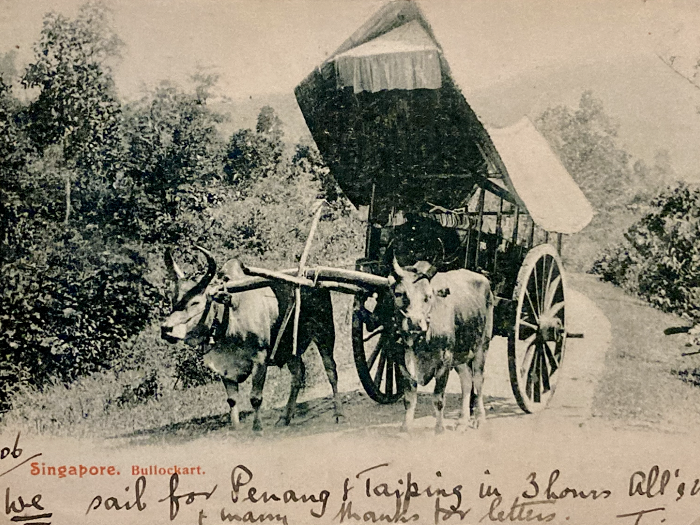 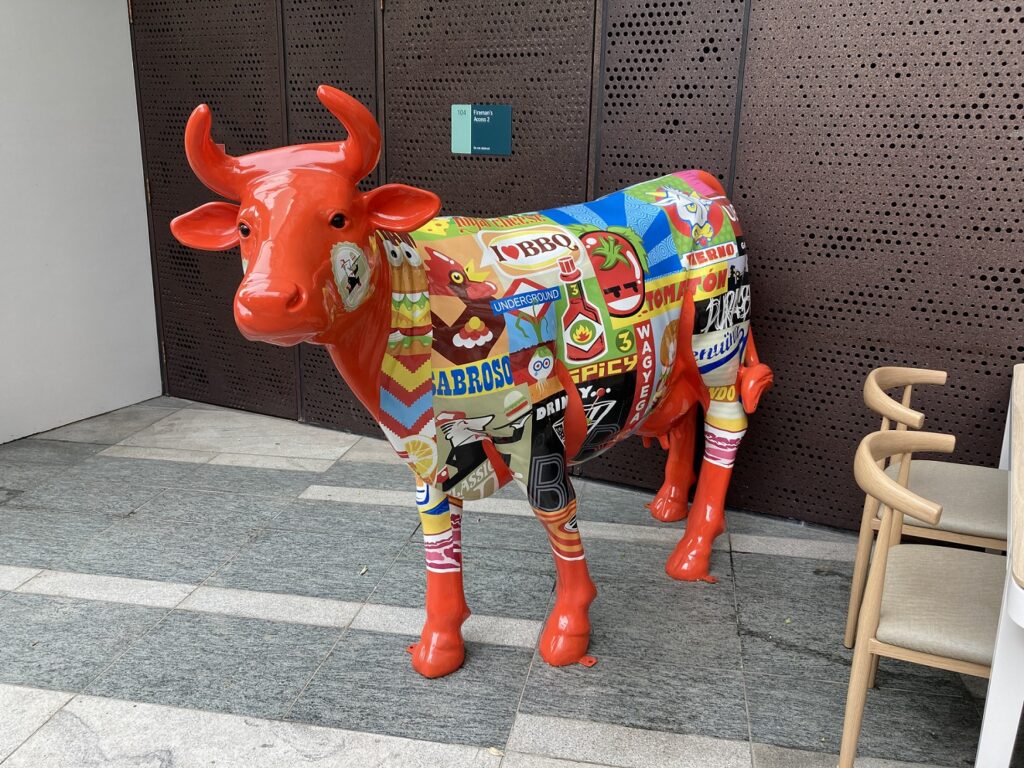 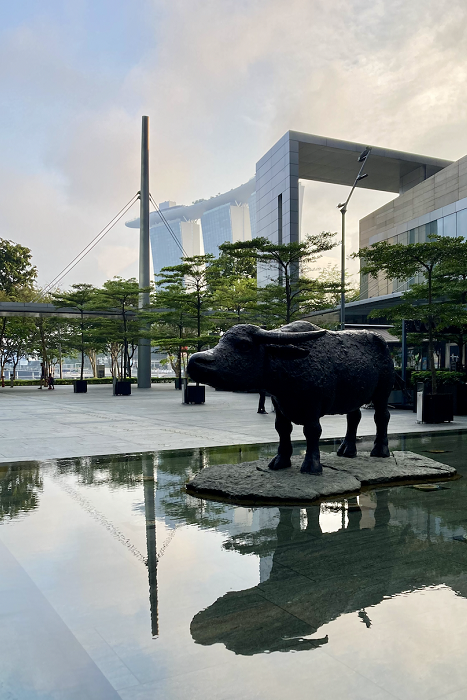 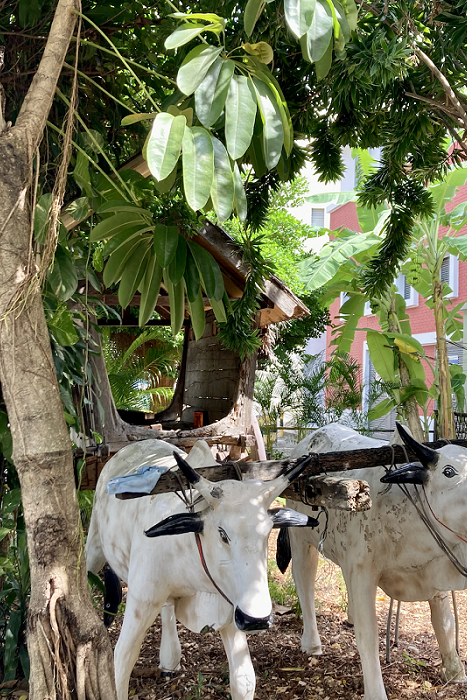 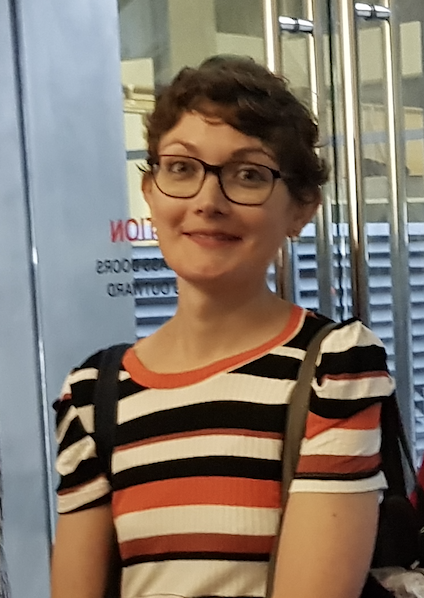 Hortense Le Ferrand is a D-MATL ETH Alumna and currently Assistant Professor at Nanyang Technological University in Singapore. Her research group works on developing fabrication methods for composites and ceramics, with a strong bio-inspiration component.