An autonomous vehicle narrates a day in its life as it drives a group of visiting ETH Zurich researchers around the San Francisco Bay Area. During its journey, it reveals its perception of the world, the societal responsibility it bears, and the potential impact it has on everyday life.

I woke up feeling completely recharged, even though I only slept for four hours. Last night there was a lot of work to do, so I ended up sleeping in the calibration room at Stanford. A notification appeared on my display reminding me to pick up Roman Engeler at the Stanford University campus. “Let’s go,” I said to myself. Group picture of Roman Engeler, Gioele Zardini, Nicolas Lanzetti, and Felix Böwing (photo credit: Roman Engeler, Gioele Zardini, Nicolas Lanzetti, Felix Böwing/ETH Zurich)
It was another sunny day in the San Francisco Bay Area and the streets were crowded with people rushing to get to work. A few people stared at me as if I were a headless horseman or was being driven by the invisible man, but perhaps they still aren’t quite used to seeing autonomous cars navigating the streets alone. Roman and his friends Gioele Zardini, Nicolas Lanzetti, and Felix Böwing were waiting for me to pull up to the curb in front of a low-rise house in Stanford. They came all the way from Switzerland to work in the renowned research lab of Professor Marco Pavone. On campus, I had to employ all of my sensors and algorithmic decision-making processes in order not to run over any pedestrians or hit a cyclist. To improve my maneuverability, Roman suggested that I fine-tune my behavior with an update of my neural network to include some newly gathered data. My first stop was the Stanford University Stadium, where Tim Cook, CEO of Apple, was set to address the graduating class of 2019 with a commencement speech – it was truly inspiring – at least that is what I overheard from the guys talking in the car. Next, I took the guys to the Arrillaga Alumni Center, where they listened in on CEO Marc Reibert’s keynote speech about Boston Dynamics. I already felt their excitement for autonomous tech as they chatted about how it will support everyday life. While they got comfortable for the next leg of our trip, I added, “Hotel California” from the Eagles - one of Roman’s favorite songs to our playlist. Stanford University’s commencement speech with Tim Cook, CEO of Apple (photo credit: Roman Engeler, Gioele Zardini, Nicolas Lanzetti, Felix Böwing/ETH Zurich)
With the guys back in the car, I headed to our next destination, the main fountain on Stanford’s campus. “Fountain hopping” has become a Stanford tradition. Although it might seem weird, swimming or cooling off in one of Stanford’s many water fountains is a favorite local pastime. While driving the guys to the main fountain, we encountered some of my competitors from Zoox, Lyft, and Google Waymo on the road. These companies are active in the region and the guys checked them out as I drove past. Specifically, Nicolas who leverages game theoretical models to analyze competitive behavior and Gioele, who jointly optimizes design and operations for city infrastructures. These guys work way too much! The fountain party was amazing, a Mariachi band played traditional Mexican music creating a relaxed vibe. While the guys enjoyed themselves, I took the chance to update my maps and recharge my batteries. Thanks to Felix’ algorithm, I can calculate within seconds where and how much I need to charge in order to judiciously use the delicious renewable energy. Stanford University campus’ main quad - aerial view (photo credit: Roman Engeler, Gioele Zardini, Nicolas Lanzetti, Felix Böwing/ETH Zurich)
Although I didn’t care much for their wet swimsuits on my leather seats after the fountain hopping, I headed off to the next destination. In Santa Cruz the guys wanted to do some decent after work surfing. Since I did all of the driving, Felix had time on the way to show the others a video of an exciting startup company that he learned about a week ago. After arriving in Santa Cruz, I dropped them off right at the beach, then parked myself over by the lighthouse so I could enjoy the Californian sunset. 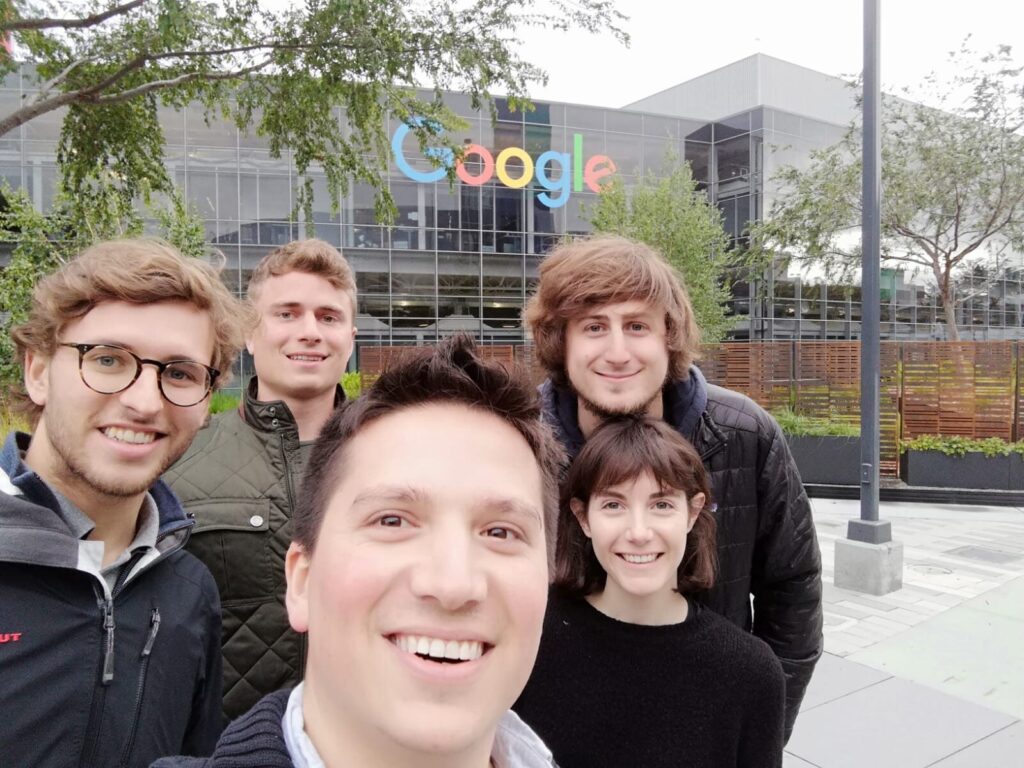 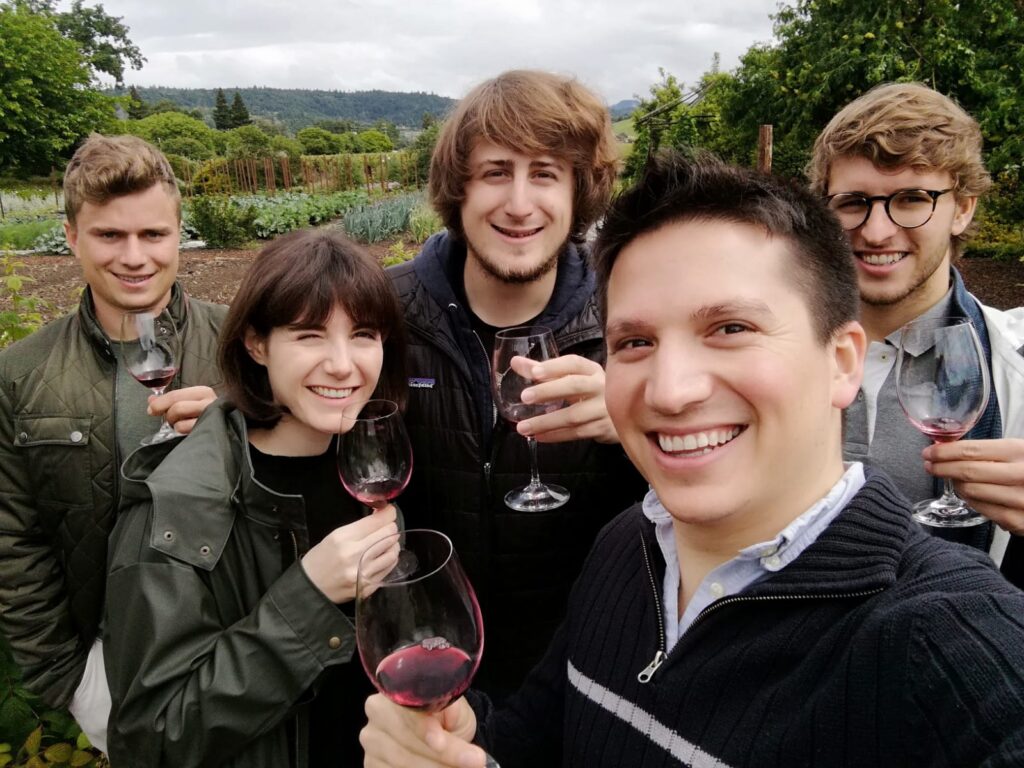 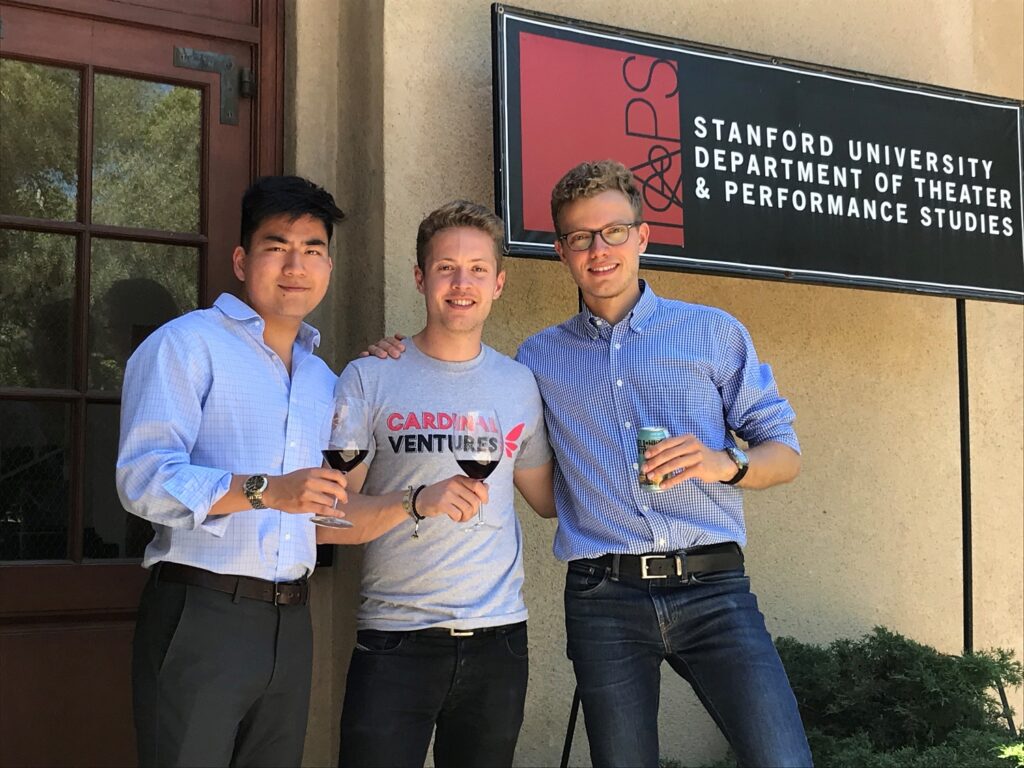 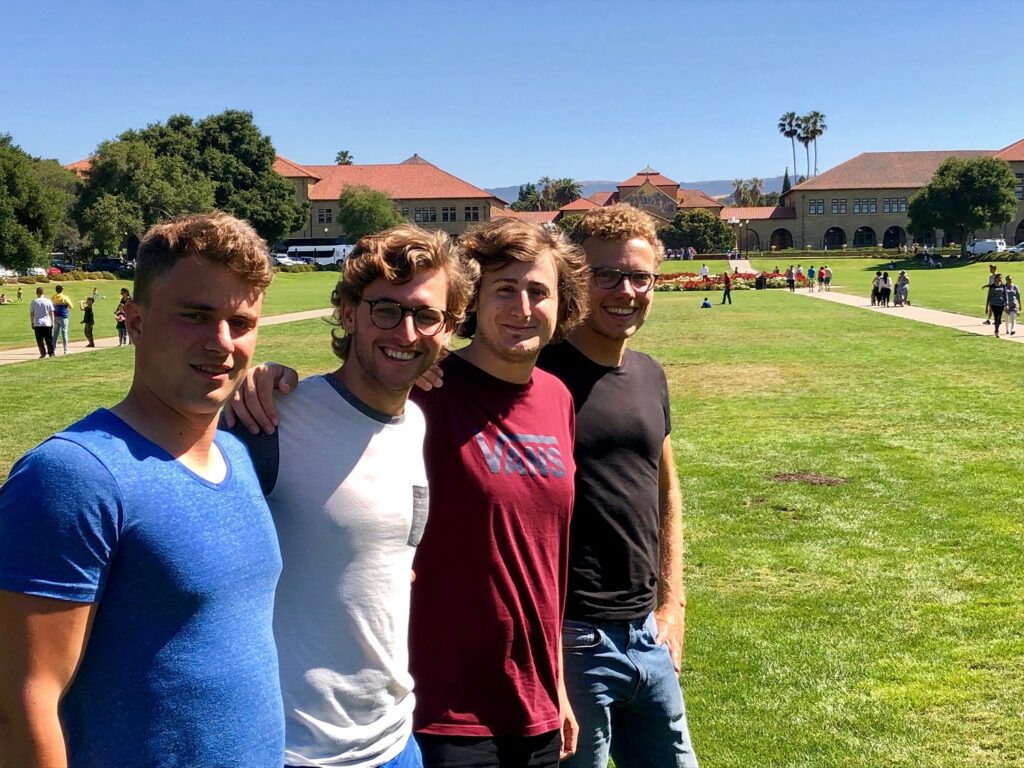 Stanford’s Autonomous Systems Lab group picture at Boston Dynamics keynote (photo credit: Roman Engeler, Gioele Zardini, Nicolas Lanzetti, Felix Böwing/ETH Zurich)
On the way back home in the dark the guys fell asleep. Of course, they must have been tired. It is a good thing that my batteries kept me wide awake. They work so hard. Together with hundreds of scientists the guys work towards a more socially-inclusive and environmentally-aware mobility. I am happy to reward them with a safe, sustainable, and affordable trip. When it came time to drop them off, I headed back to the calibration room for the night. Only to be awakened a few hours later with a notification that the Swiss guys wanted to do more exploring. “Let’s go,” I say to myself.
While this story employs some elements of fiction - the guys actually used conventional cars during their California trip and drove themselves - in the near future, autonomous vehicles like me will operate on our streets and this scenario will become entirely plausible. Felix Böwing is pursuing his master degree in electrical engineering at ETH Zurich. He is passionate about autonomous vehicles and the cross benefits for the electric power grid. Therefore he decided to do a research project at the Autonomous Systems Lab ASL at Stanford as a master thesis. The goal is to develop an efficient routing and charge scheduling algorithm for electric vehicles, which makes it possible to use them as large scale grid storage for renewable energy. Roman Engeler is a master student in Robotics, Systems and Control at ETH Zurich. His interests include machine learning for vision and decision making applied to robotic systems. He investigates how prior knowledge and uncertainty can be incorporated in fast-adapting algorithms during his time in the Autonomous Systems Lab at Stanford. Nicolas Lanzetti is a master student in Mechanical Engineering with focus in Robotics, Systems and Control at ETH Zurich. His current research interests lie at the interface of game theory, graph theory, and control theory. In the Autonomous Systems Lab at Stanford, he is investigating game-theoretical models for autonomous transportation systems to evaluate the impact of self-driving cars based mobility services. Gioele Zardini is a master student in Mechanical Engineering with focus in Robotics, Systems and Control at ETH Zurich. His passion for autonomy led him to the Autonomous System Lab at Stanford University, where he works on his master thesis on the co-optimization of the design and the operation of future mobility systems. This includes the optimal design of autonomous vehicles and of their interactions with the current transportation system.