Witnessing a Mars mission landing at its birthplace is not something you can experience everyday. We had this privilege during our research stay at the NASA Jet Propulsion Laboratory in Pasadena, California.

Arriving at NASA Jet Propulsion Laboratory (JPL) on the morning of November 26th, 2018, we could clearly feel the tension in the air. Safety measures had been increased due to the presence of high-level NASA officials and external visitors on campus. Reporters were setting up their equipment, hoping to capture the historic event. JPL engineers gathered in mission control and in the two main auditoriums on campus. Half an hour before the planned touchdown, four of us joined the crowd in one of the auditoriums.
As the landing edged closer, mission control started read out the main elements of the landing sequence, as they received the telemetry data sent from the spacecraft. This data; however, is delayed by several minutes which means that once the engineers get word that the lander has entered the Martian atmosphere, the vehicle had either already landed successfully or crashed on the surface. They refer to this phase as the infamous “seven minutes of terror” in the JPL community. To ease the tension, the engineers pass along “lucky peanuts” shortly before this critical phase.
Total silence spreads across the auditorium. “100 meters, 50 m constant velocity, 37, 30 m, 20, stand by for touchdown… Touchdown confirmed!” The confirmation that InSight, equipped with a seismometer built by scientists from ETH Zurich, had safely landed on Mars prompted ecstatic cheers and applause from all the teams at JPL. InSight joins a family of international rovers and landers uncovering the mysteries of Mars. It is the first outer-space robot to analyse in-depth the inner structure of the red planet. This opportunity was in part, made possible by more than two decades of cutting-edge seismology research at ETH Zurich. Indeed some of InSight’s data streams will be processed and interpreted by the ETH “Marsquake” service. 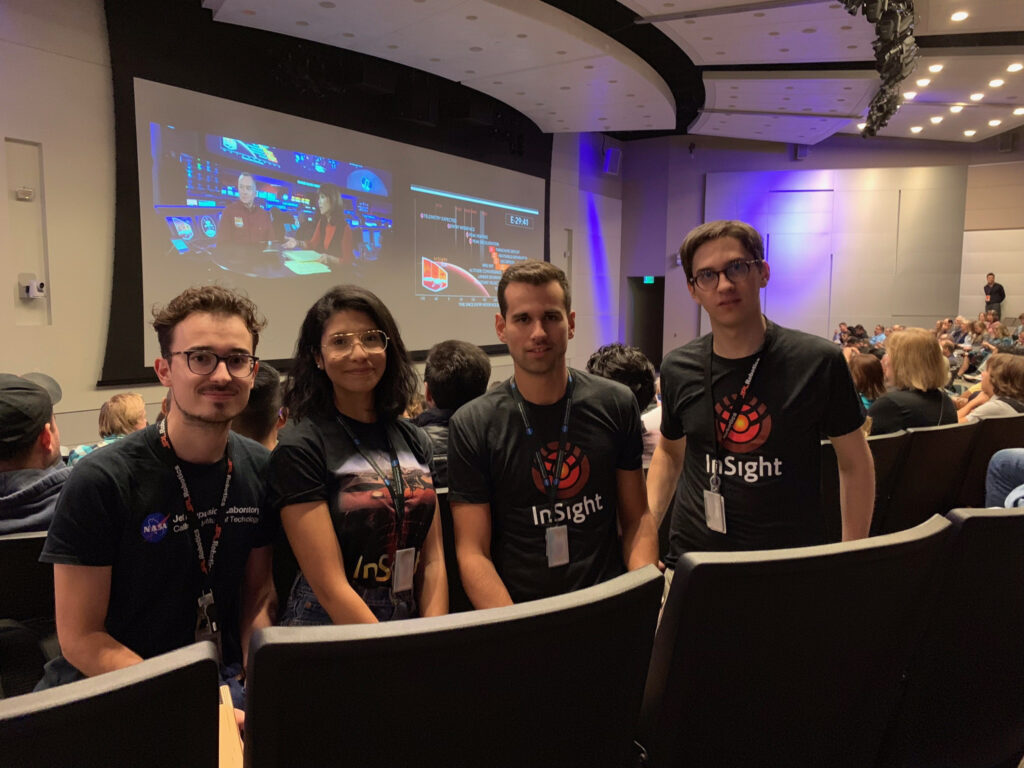 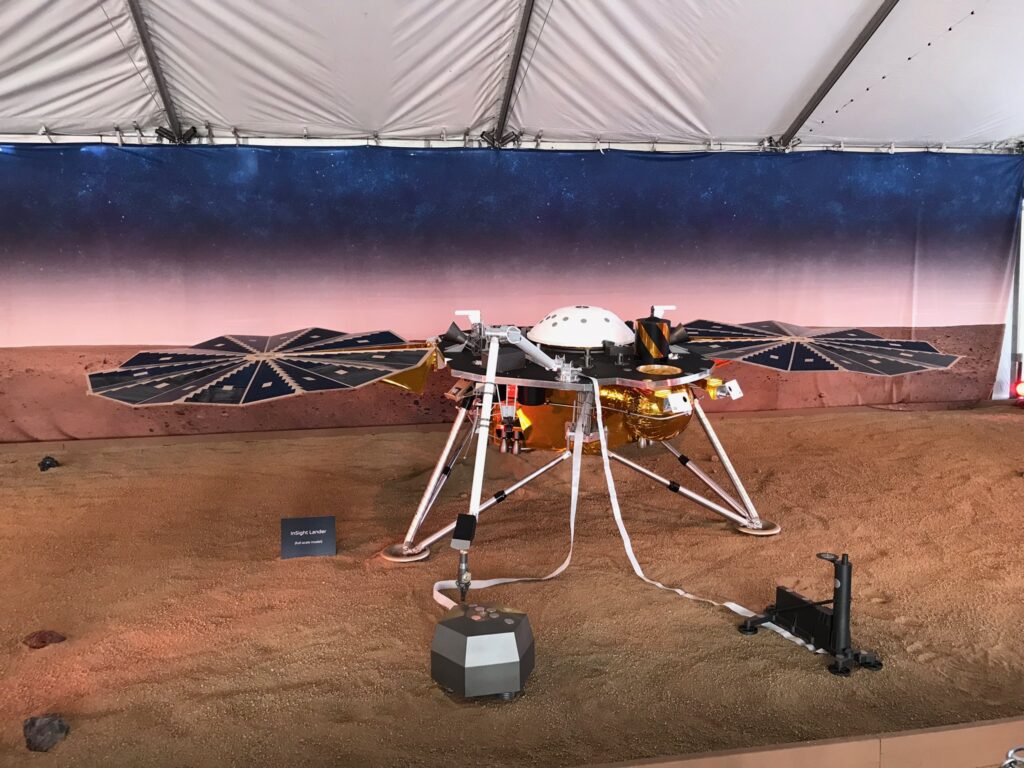 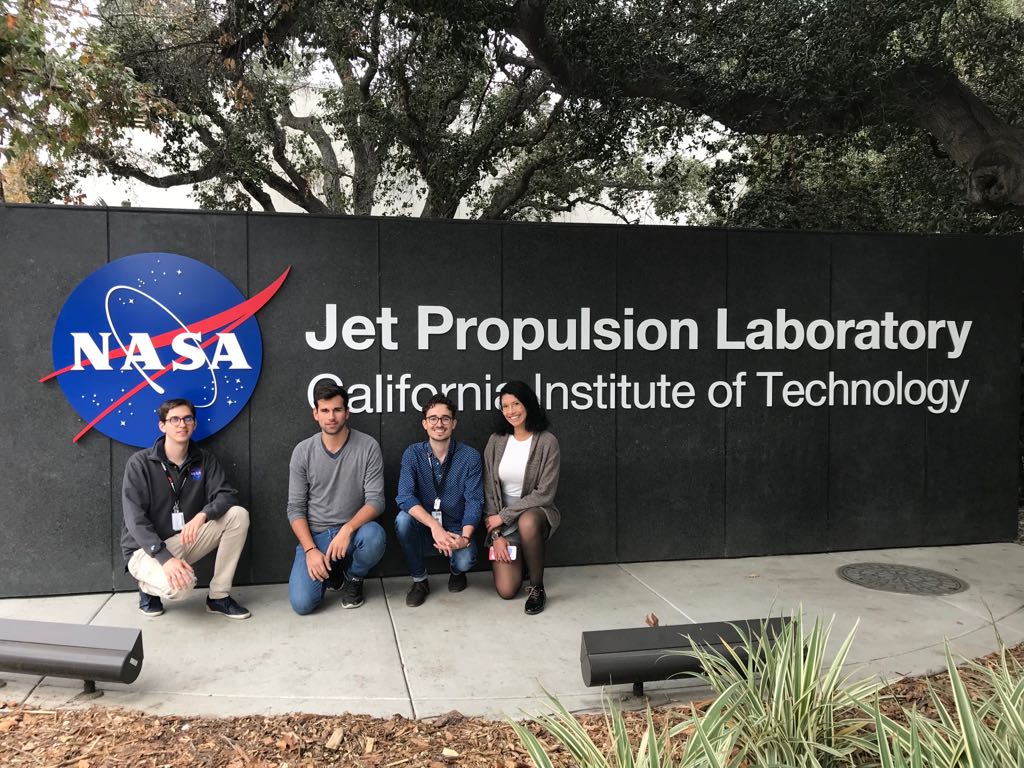 In front of the JPL logo (photo Credits: Giulio Autelitano)
The InSight mission itself is the brainchild of scientists and engineers working at the Jet Propulsion Lab, a NASA research and development center responsible for robotic space exploration and Earth Science. JPL looks back on a 80-year history of designing and operating pioneering space explorations, such as the Cassini-Huygens mission to Saturn and the Curiosity mission.
Future missions, such as the new Mars 2020 rover, carrying the first “Mars Helicopter,” might also draw on more research and technology developed by ETH Zurich and ETH alumni. For example, the four of us – all researchers at JPL, are currently focused on state-of-the-art guidance and control algorithms, as well as machine learning and perception for autonomous operation of micro aerial vehicles. Such work might be employed by future generations of flying robots on other planets and for autonomous exploration of challenging environments on Earth.

No matter what the future has in store for us, JPL has taught us to “Dare Mighty Things.” Daniel Hentzen is a Mechanical Engineering master student, currently completing his master thesis in NASA JPL’s Aerial Mobility group as a visiting student researcher from ETH’s Autonomous Systems Lab, focusing on robust flight control and estimation algorithms. During his undergraduate studies at ETH, Daniel was a battery engineer and team leader at AMZ Racing, ETH’s world-leading Formula Student Electric team.
Andrea Tagliabue is robotics engineer at Caltech/NASA JPL and he recently graduated in the Master’s programme of Robotics, Systems and Control at ETH Zurich. During his master, he was visiting researcher at U.C. Berkeley and research assistant at the ETH’s Autonomous Systems Lab. Prior to that, Andrea received a B.Sc. with honours in Automation Engineering from Politecnico di Milano and worked at ABB under the “dream-internship” talent program.