photo credit: ETH Zurich
Imagine for a moment that you could attend a scientific conference with the most distinguished scientists of the world, all of them Nobel Prize winners, who made groundbreaking discoveries that shaped your field. Imagine that conference would not attempt to satisfy the usual scientific craving for the latest results in a specialized discipline, but instead is dedicated to very general topics relevant for all scientists, in particular young scientists at early stages in their careers. Imagine you could decide freely which topics you would like to discuss with the Nobel Laureates or even go for a walk asking him or her the questions that have been burning inside you for years. A conference that brings together the most distinguished senior scientists and the next generation, providing the opportunity for them to connect, inspire and learn from each other, yet small enough to meet nearly everyone participating. If that sounds like a scenario from an ideal world, then you should look to Lindau, a small, medieval town at the eastern tip of Lake Constance in southern Germany, where this utopia becomes reality every summer. photo credit: ETH Zurich
Since 1951, Lindau hosts the world’s most unique scientific conference. For one whole week, the city is transformed into the scientific capital of the world. In 2018, 39 Nobel Laureates, mainly of Physiology and Medicine, met with 600 young scientists from 84 countries and I was very fortunate to be among them. The meeting was held in the Inselhalle, a modern, light-flooded building overlooking a small marina, the lake, and a sunny adjacent square with white garden armchairs and flat tables. The generous and friendly foyers and hallways inside and the spacious grounds of the Inselhalle generate a feeling of calm and airiness that facilitate chance encounters. The program followed the same motif - clearly designed to foster an exchange between the generations.
In the mornings, the Nobel Laureates gave short lectures with topics entirely of their own choosing, but often concerning their great discoveries. For us students, this provided the spectacular opportunity to learn about some of the most groundbreaking discoveries in biology not from a textbook – as we usually do – but from the very person who made the discovery. Stories of discovery were spiced-up with the occasional anecdote and personal memory. In neuroscience, for example, no living scientist has contributed more to our understanding of the brain than Swedish Nobel Laureate Torsten Wiesel. His shared discovery with David Hubel on the organization of the visual cortex are standard material for every introductory neuroscience class. Receiving one of Wiesel’s very rare presentations on his life’s work and his collaboration with Hubel was an absolute privilege for me. It was a unique experience, which not very many neuroscientists get to share. 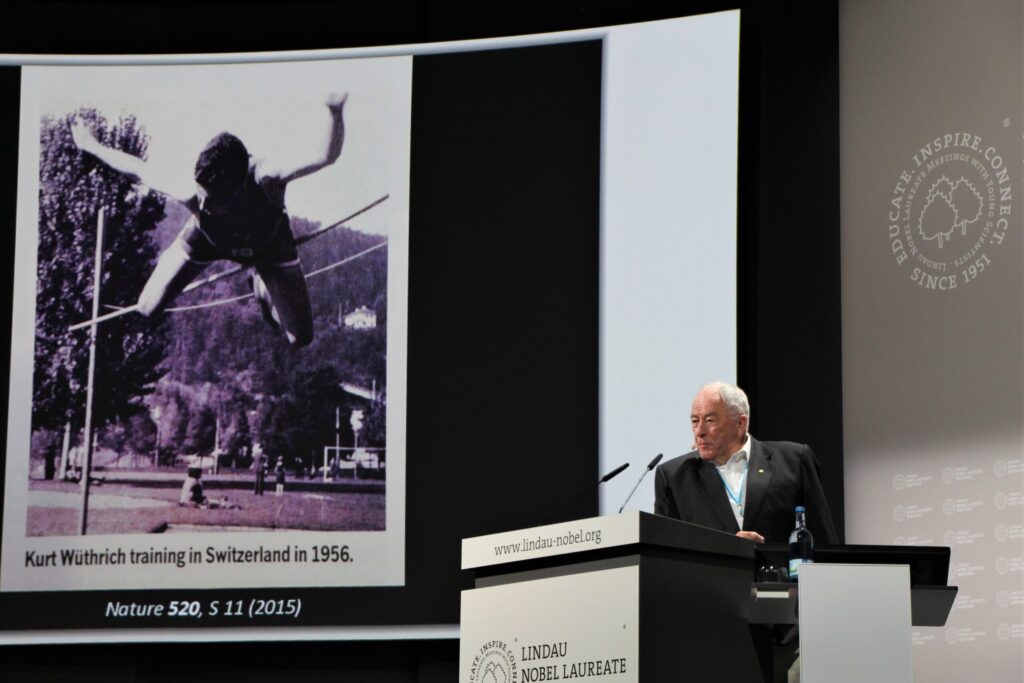 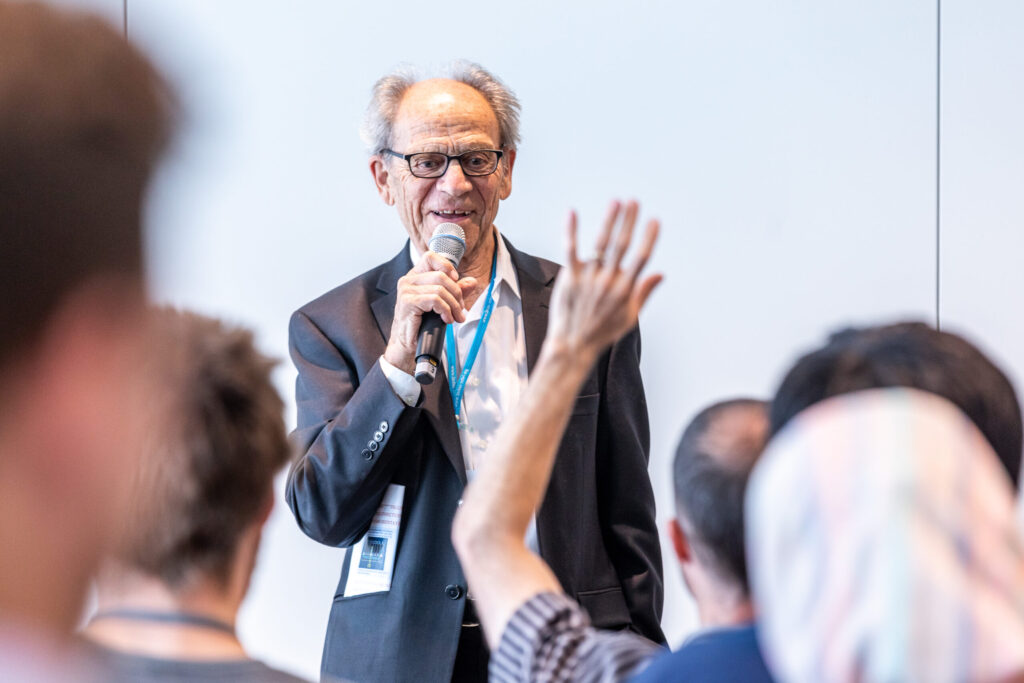 Open exchange with Thorsten Wiesel (photo credit: Christian Flemming/Lindau Nobel Laureate)
The central aim of Lindau, however, is to catalyze personal interactions between Laureates and students, and this is the focus in the afternoons. It is even possible to join a Laureate for lunch in a restaurant or accompany them for walks through the vineyards and countryside around the lake. Together with other young neuroscientists, I enjoyed a casual lunch with Wiesel after his presentation. For an hour and a half, we described our research projects to him, discussed the current developments in neuroscience, and talked about the importance of asking an original and significant scientific question.
In the extensive afternoon discussion sessions that follow, students can ask Laureates any question that they wish - often developing into lively discussions. One of my many memorable encounters was with Laureate Steven Chu, who not only received a Nobel Prize in Physics, but also served as Secretary of Energy under Barack Obama. He shared his vast experiences not only in science, but also in policy making and allowed me, and others who joined us, some deep insights into his ways of working and thinking.
Of all of the possibilities to engage with the Laureates during the conference, the chance encounters in the halls were, perhaps, the most exciting and fun and often conversations started spontaneously and many people joined in, sometimes going on for hours. Exposure to such outstanding researchers, observing their reasoning, thinking, and argumentation, as well as trying to understand their personalities was not only a revelation for me, but also highly inspiring and, I believe, a formative experience. The unique, casual, and friendly atmosphere of the meeting fosters this exchange on a personal level and eventually the realization hit me that the Laureates come because they too are interested to talk to us and because they in turn wish to learn from the young generation of scientists.
The central topics raised at the meeting concerned issues that all scientists face today and were mostly addressed in panel discussions that featured Laureates, experts, and young scientists. Laureate Randy Schekman, who is the current editor of eLife, Laureate Harold Varmus and others fought a fierce battle on stage with the CEO of Springer Nature over the current (mis-) developments in the publication process and how we ought to change it for the better. Laureates Steven Chu, Peter Doherty and others discussed the role and responsibility of science in a time of ‘alternative facts’ and the emerging post-factual era, at the brink of which we might be standing. From Laureate Martin Chalfie, one of the co-developers of green fluorescent protein (GFP), we learned how to write the perfect post-doc application and about the pitfalls young scientists face when starting their own group. 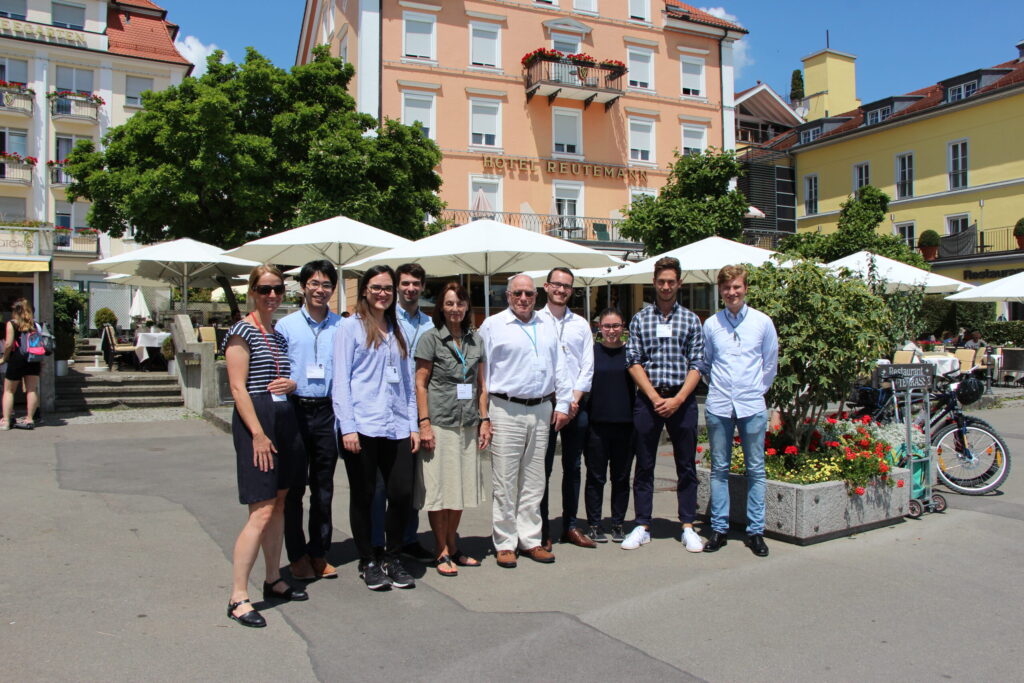 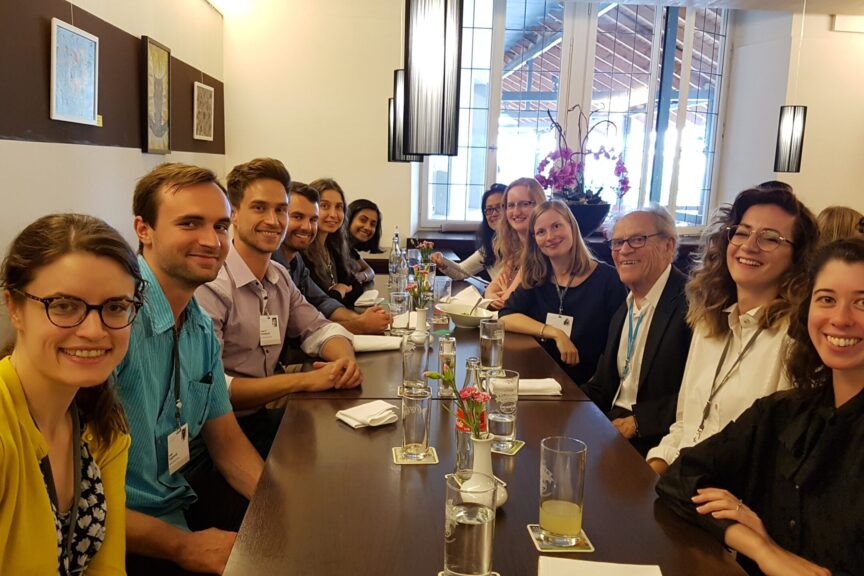 Students at lunch with Nobel prize winner Thorsten Wiesel. (photo credit: Gregor Schuhknecht/ETH Zurich)
Kurt Wüthrich, one of the ETH Zurich Laureates and Laureate Ferid Murad, shared their experiences and opinions on successful leadership in science. Such topics rarely find a place in conventional scientific conferences and the Lindau meeting provides a unique forum to discuss such a topic between young and distinguished scientists. Receiving advice from Nobel Laureates probably doesn’t hurt one’s career and the Laureates gave it freely. Whenever asked, they tried their best to provide us with a compass to maneuver the jungle that science can appear like to a young person.
The greatest gift, however, that Lindau makes to the young scientists is the chance to be inspired by some of the greatest scientists of our era, people whose names might appear in history books. Looking back with a little distance now, I am still overwhelmed by the impressions I collected. At the same time, I’ve come to recognize that my understanding of science has evolved and I have realized that the only way to become a good scientist is to do science for the right reasons. Reasons that involve a deep passion and burning curiosity to solve a question that keeps you awake at night.

What is the question that keeps you awake at night? Gregor Schuhknecht studied Neuroscience at ETH Zurich and is currently a doctoral student in the lab of Prof. Kevan A.C. Martin at the Institute of Neuroinformatics, where he is investigating the neuronal circuits that are embedded in the neocortex. As one of 600 young scientists, he was selected to attend the Lindau Nobel Laureate Meeting 2018, dedicated to Physiology and Medicine.
Meet Gregor on Facebook and Twitter: