Diverse bean grain types collected during field visits. Consumers are very picky about the look of their beans, therefore beans are bred to resemble certain market classes
(e.g. red kidney beans, pinto beans, cannellini beans, etc.). All grain types not resembling these are discarded. (photo credit: ETH Zurich/Michelle Nay)
Although I have been working with beans for two years now, I only fully realized the importance and impact of my project when I arrived in Uganda two weeks ago. The traditional meal here is a bowl of beans with starchy side dishes. Very few people can afford meat, so for most people in Uganda this means they eat beans every day: for lunch, for dinner, during the week and on weekends. Most farmers practice subsistence agriculture, and every free piece of land, no matter how small it is, is cultivated. The crop yield on these small patches is very low and plant diseases are a widespread problem in the region. One solution would be to use pesticides, but these are not always available, and they are often expensive and unsustainable. The more feasible solution would be to enhance crop yields. Under the challenging conditions encountered on smallholder farms, it would be more sustainable to breed plants that are relatively resistant to plant diseases. Bean plant showing characteristic symptoms of Angular Leaf Spot. The fungus causes dark angular spots on the leaves. When an infection is severe, the leaves wither and fall. Plants with withered leaves harvest less energy from the sun and thus produce less or smaller grains, resulting in reduced crop yield. (photo credit: ETH Zurich/Michelle Nay)
Providing the scientific background to breed beans resistant to fungal disease known as Angular Leaf Spot is the objective of my doctoral studies. Considered a major limitation to bean production in the tropics, Angular Leaf Spot causes yield losses of up to 80%. In my project, I am investigating the genetic basis of disease resistance in beans and developing tools that facilitate resistance transfer to new bean varieties through conventional breeding. To ensure that my findings have a positive effect in farmers’ fields, I am working in close collaboration with the International Center of Tropical Agriculture (CIAT, known by its Spanish acronym). CIAT manages large bean breeding programs focused on low-input systems encountered on smallholder farms throughout the tropics. They have developed bean varieties that are stress resistant and perform well in drought, heat and low nutrient environments. To release new varieties, CIAT works with national agricultural programs, and in Africa it coordinates the Pan African Bean Alliance (PABRA), a network of 30 African countries, that is responsible for the dissemination of seeds on the ground.
My project requires extensive fieldwork in Latin America and Eastern Africa, the main bean producing areas of the tropics. Over the past two years, I have been conducting trials in Colombia, where I have been testing over 300 different bean varieties for their resistance to the fungus that causes Angular Leaf Spot. Because pathogen populations differ across continents, the trials also need to be conducted in Africa, and that is why I am currently in Uganda.
In both Colombia and Uganda, my local colleagues warmly welcomed me and made sure that I received full exposure to their culture. Although I have only been in Uganda for a short time, I have already been invited to the 60th birthday party of a colleague’s mother. In Colombia, my colleagues loved to go dancing and even at the parties of the research station everyone danced salsa. Caleños (people from Cali, the city I was staying in) learn to dance at about the same time they learn to walk, and fortunately, they were very patient in teaching foreigners, like me, how to dance. Plants’ reaction to Angular Leaf Spot vary. The variety planted in the lowest row is resistant to Angular Leaf Spot, while the varieties in the upper rows
have characteristic angular lesions on leaves, and the leaves are turning yellow. (photo credit: ETH Zurich/Michelle Nay)
While I enjoyed exploring Colombia and Uganda, conducting research sometimes poses challenges; but with some creativity and flexibility, I have always found ways to overcome the challenges. One difference working in the field versus ETH is the availability of lab reagents (a substance used in chemical analysis) and services. At ETH, reagents are usually available on campus or can be shipped in less than a week. In Colombia it took 2-3 months for reagents to be delivered. I once had to send three frozen 1.5ml tubes for DNA sequencing to the USA.I packed the three tubes in 20kg of dry ice, but then the package was stuck in customs at the border for a week. Luckily, the shipping company was experienced with this type of cargo: they replaced the dry ice and the samples were saved. 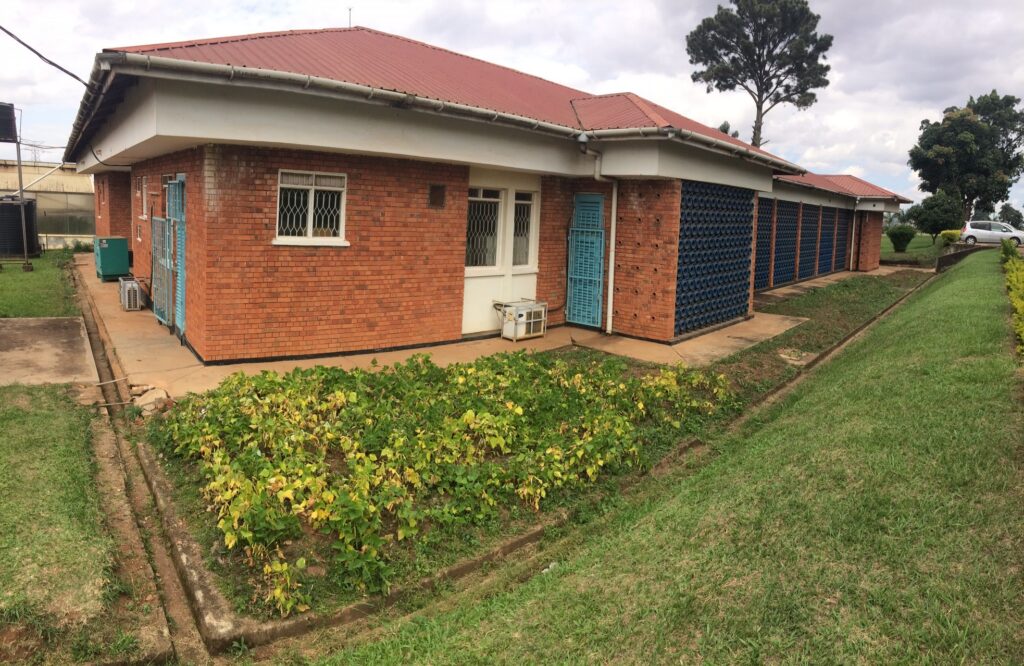 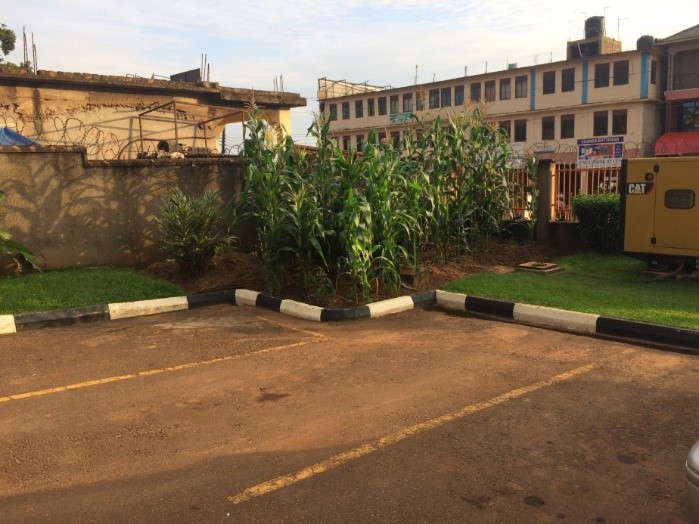 Maize is planted next to the parking of the hotel I was staying at during my first nights in Kampala. (photo credit: ETH Zurich/Michelle Nay)
Even though things did not always go according to plan - for example seed shipments were delayed, rainy season was unpredictable, and mice damaged my plants in the greenhouse - somehow we always found a solution to bring experiments to a successful end. The success is due to the support of talented scientists in Colombia and Uganda with whom I had the privilege to work. Meeting them, I realised the opportunities that we have as Swiss based scientists. For someone in Colombia or Uganda with a Master’s degree and doing similar work, it is difficult to find employment or access opportunities for a PhD position in their field of study. For my fellow ETH Zurich graduates it is comparably easy to find a job that demands their skills.

This experience has made me appreciate, even more, all the opportunities I have been given to travel and learn about how research is conducted in other parts of the world. I hope that at some point in my career I can provide opportunities to scientists that are not as privileged. Michelle Nay is a doctoral student in the Molecular Plant Breeding group at ETH Zürich. Her doctoral research is funded by the Engineering for Development (E4D) Program of ETH Global and is conducted in collaboration with CIAT.