Jugaad (in Hindi: जुगाड़) is a colloquial term in India and can be roughly translated to “hack” or “magic”. The word is used for a simple fix or work-around, a solution that bends the rules and is representative of how Indians are able to solve problems by creativity with limited resources.

This can range from a quick ventilator fix with a rubber band, to “connecting” your household to the power grid by just tapping the overhead electricity lines with loose-ended cables, or even building your own vehicle powered by only an agricultural water pump engine. Not always “safe”, definitely not always professional, but for sure always creative. To fully understand India and its culture, one has to learn the way of Jugaad, as Christian Heiduschke and I (Alexander Zöchbauer) did on our journey to India on behalf of ETH, where this mentality was our constant companion.

Christian and I are both Electrical Engineers at ETH Zurich and we are doing our semester project with the RoboCup Team of ETH. RoboCup is a soccer league, where five humanoid robots play soccer fully autonomously and compete against other robot teams from universities all over the globe. The challenge of this is to develop efficient algorithms and to program the robots in a smarter way than the other teams. On a cold winter day, after a coffee-powered productive morning of coding, my blood sugar levels were critically low, so I dragged myself to the place where almost every student is rushing at noon: the Polymensa. On this very day, a poster caught my attention. It was the offer from ETH Global to present a student project at Techkriti, a tech exhibition and festival in the city of Kanpur in India. I was immediately amazed by the idea. India, the land of the Maharajas, origin of Sanskrit, the mother of European languages and home to Mahatma Ghandi. This was a country I had always wanted to explore, and at the same time being an ambassador for ETH Zurich seemed like an excellent idea to me. After gulping down my nutritious Rösti with Bratwurst, I contacted ETH Global and set up a meeting where we would discuss the requirements and challenges of our trip. Once we had prepared the necessary posters, stickers and flyers we were good to go.

After arriving in Delhi

I landed at Indira Gandhi International Airport in New Delhi and compared to the small and cosy airport of Zurich, the airport in Delhi was huge, busy and impressive at the same time, which symbolized already the vast difference between Switzerland and India.

Coming out of the airport looking for a taxi, only 30 minutes after first setting foot on Indian soil, I encountered another difference to Switzerland: negotiating. Prices for almost all Indian goods and services are not fixed and very strongly dependent on your negotiating skills, but also on the language you are speaking, your skin colour, appearance and even gender. After an only partially successful negotiation attempt to minimize the taxi costs, we set off to the hostel. Although there are technically white lanes on the road, which should indicate where cars ought to drive, the signs had more of an “advisory” character and the drivers were taking a more “creative” approach to navigating through the rush hour traffic jam. In addition to the stressful driving style of the taxi driver, we noticed that the car was making sounds a car should not normally make, so he went to the front of the car and saw that part of the front chassis was hanging down and scratching the street. As a reflex, I would have called roadside assistance, but the driver made it clear to me that in Delhi, during the rush hour, this option was definitely not on the table. His solution was tograb the duct tape from the back seat and “fix” the hanging part. This was my first experience with Jugaad, and while I was a bit shocked and impressed by the simplicity and unprofessionalism at the same time, it definitely did the job. Eventually we reached the hostel, in Laxmi Nagar in East Delhi and, as soon as I stepped outside the car, I was hit hard by the real India. We were in a street under a highway packed with traffic. Next to the road, small street food stalls were offering fresh homemade dishes. Piles of garbage were separating the food stalls from the street vendors, who were praising their goods loudly, and groups of youngsters were hanging around playing cards on the floor. The huge crowd that was trying to squeeze through the narrow gap between cars and food stalls consisted of families with small kids, beggars, priests, businessmen in expensive suits and, most importantly, cows; basically, the whole spectrum of the population in New Delhi. Since there are mostly no street names written anywhere, moving around in this evening crowd can be somewhat difficult, but, with the hospitality and helpfulness of the Indian people, I finally found my way to my accommodation and fell asleep immediately once I reached my bed, overwhelmed by these first impressions.

Before heading to Techkriti, we decided to travel around and get in touch with the Indian culture. For me, the thing that impressed me the most while travelling around India was the diversity. Once I entered a new state, I dived into a whole new world with a different landscape, architecture, language, climate, food, etc. From the hot Thar desert in Rajasthan to the cold mountain monasteries of Sikkim in the Himalaya, one could have a hard time in believing that all this beauty can fit in one single country.

However, one constant always remained regardless of which place you were: the helpfulness of the Indian people. No matter whether they spoke English or not, they would try to answer your questions in Hindi, Rajasthani, Punjabi, Nepali or any of the other 23 official languages -- including the wildest use of body language. I can remember a scene: 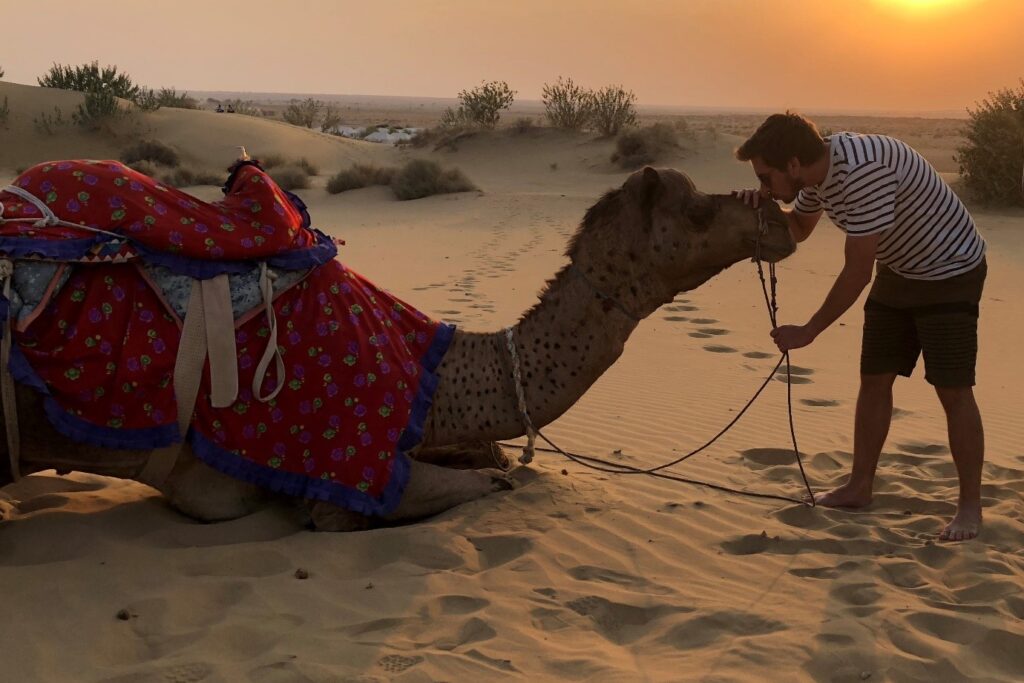 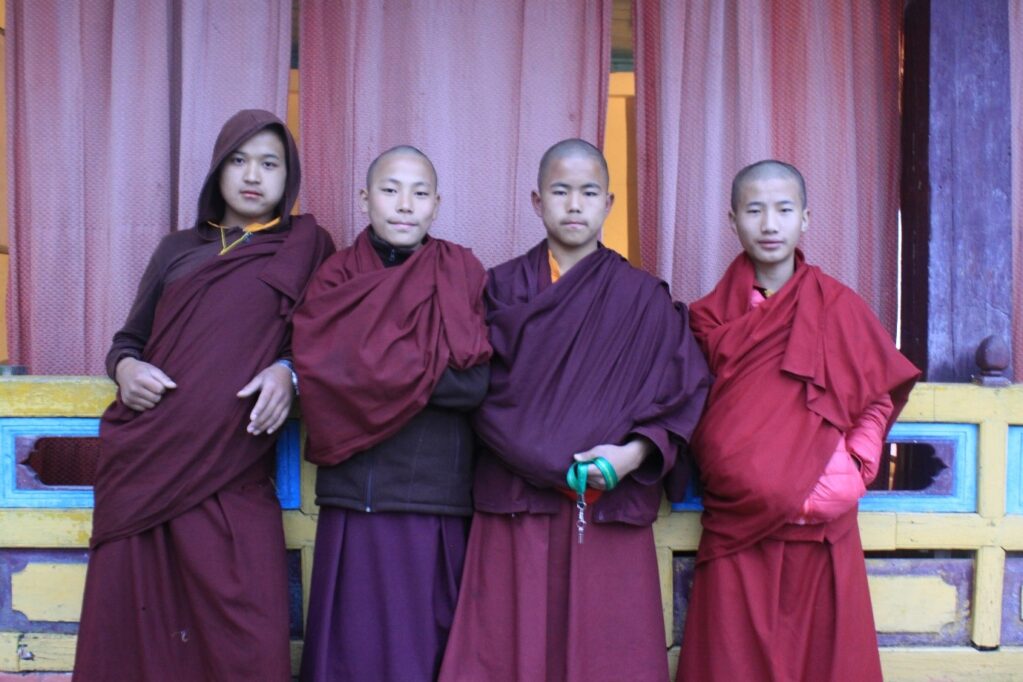 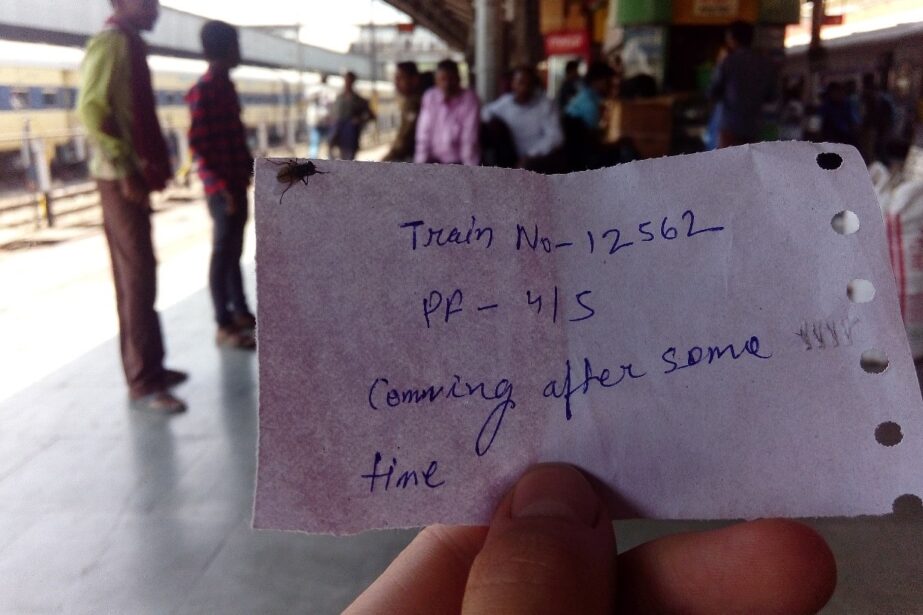 Indian precision of estimated arrival time at the train station in Kanpur (photo credit: Alexander Zöchbauer/ETH Zurich)
I was waiting for a train and I asked a random stranger, who was waiting for another train, if he could tell me from which platform my train would depart. The quick answer was “No”, but that was not the end of it. He took me to the other end of the station to an enquiry counter, queued up 20 minutes for me, brought me back to the right platform, insisted on waiting until my train arrived and did not leave until he saw me entering the right coach and taking the right seat.
Due to the big distances in India, it takes a lot time to move from one point of interest to another, but the railway system, which India inherited from the British, allows you to reach almost the whole country by train and works pretty well in general. However, India is large and it might happen very frequently that a lot of people want to travel to the same destination, at the same time, on the same train, which results in massive congestions causing delays. So you will need to have trust that somewhere, in the control centre of the Indian railways, sits someone who makes busy phone calls to five different people at the same time to redirect your train and, with the help of Jugaad, to make it eventually arrive at your destination. In any case, patience needs to be a familiar word to you. In one situation, I was waiting for the train from Kanpur to another city, which had a delay of 17h already and no arrival in sight. I asked the station manager whether he knew when the train would finally arrive and he handed me a piece of handwritten paper over the counter. It literally stated the train would be arriving on either platform 4 or 5, and the estimated time of arrival was “after some time”. The Techkriti festival takes place at the Indian Institute of Technology (IIT) in the city of Kanpur in the north of India. The city itself is dominated by factories, giving it an industrial character. The IITs are very famous in India and are seen as the top universities for engineers, and there are about 20 of them in the whole country. Despite the large number of IITs, university places are limited, and a massive number of applications makes the admission process very competitive. The result is that only the best high school students can secure a place for themselves. Naturally, these are the kind of institutions which ETH is interested in establishing or maintaining contact with and, by our participation at Techkriti, we were trying to achieve exactly that. Unlike similar events in Switzerland, where university fairs are often aimed at a specific target group that has already some sort of knowledge or interest in a particular field of study, Techkriti attracts the attention of the general public. A large variety of people came to the booth we set up and asked curiously about RoboCup events and ETH Zurich. From young school groups, students, families with children and grandmothers to businessmen and army generals, everybody was interested. I was not expecting such curiosity, from people with all kinds of backgrounds, who sometimes had no technical knowledge at all.
The most impressive moment was when a young boy came up to me and showed me the small robot he built out of pieces of an old TV and electronic parts he bought for under $10 on the local market. He could navigate it around the exhibition hall with his remote control. That was the moment when I realized that the only way he could build the robot was by using Jugaad; in this case, Jugaad was not an action out of laziness or ignorance. It was facilitating creativity in order to achieve your goals with limited resources. Very well-paid professors at elite universities all around the world make huge efforts to make their MacBook Air-equipped students “think outside of the box”, but this 10-year old boy was already doing that out of sheer necessity. I am convinced that, when he grows up, he will become a very talented engineer. In retrospect, I am not surprised by why I met so many ambitious and smart engineers at IIT Kanpur; or why many countries are outsourcing big parts of their software development to India; or why Sundar Pichai is now CEO of Google. A future engineer is making first contact with a robot (photo credit: Christian Heiduschke/ETH Zurich)
I am sure I personally benefited immensely from attending Techkriti and visiting India in general. We represented ETH with the values it stands for and we brought it closer to a broad Indian audience, and especially to local IIT students, who were interested in hearing stories about what studying engineering on the other side of the globe is like. For myself, I hope I can take the way of Jugaad with me and bring it back home to ETH.

With those final words I say: धन्यवाद – Dhanyavaad! – Thank you! Alexander Zöchbauer is originally from Austria. After completing high school and civil service there, he came to ETH Zurich to study electrical engineering and information technology. On the occasion of the 24th edition of the Techkriti Festival at the Indian Institute of Technology (IIT) Kanpur last March, he travelled to India with his colleague Christian Heiduschke to present their student research projects